Fenghuang County is located in the southwest of Xiangxi Tujia and Miao Autonomous Prefecture in Hunan Province, with a total land area of about 10 km2. The population of the city is composed of 28 ethnic groups including Miao, Han and Tujia. It is a typical ethnic minority gathering area. Fenghuang is a national level historical and cultural city, the first batch of top national tourism cities, the national AAAA (4A) level scenic spot, and one of the top ten cultural heritages in Hunan Province. It is often referred to as one of the top three ancient counties, namely Lijiang in Yunnan Province, Pingyao in Shanxi Province and Fenghuang in Hunan Province. In other designations, people rank Pingyao in North China and Fenghuang in South China as the champion in their own region.

The national level historical and cultural county Fenghuang, although built about 400 years ago, has gone through all vicissitudes and remains unaffected. The primitive ancient city shows a sense of simplicity. The Tuo River flows gently through the county. The former dwelling of the great literati Shen Congwen and the towering East Gate City are representatives of the attractions. Fenghuang offers both beautiful scenery and long lasting human history. Tourists willingly pay tribute to the long-gone history. The charm of Fenghuang has brought it many guests from afar. 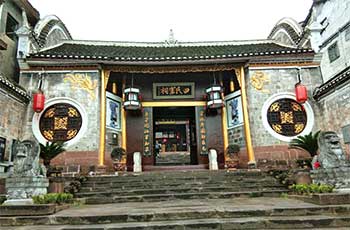 Tian Clan Hall is located in Laoyingshou Street on the north bank of the Tuo River. It was built in 1837, during the Qing Dynasty. Tian Xingsu (of Miao Minority, born in Fenghuang), then Guizhou Provincial Commander-in-chief and Imperial Envoy contributed funds for the Clan Hall. This is a clan ancestral building complex with strong ethnic characteristics. There are six fan-shaped steps made of red sand-stone in front of the gates. There is a wide platform before the steps. There are actually three gates, of which the central gate has symmetrical parts. The left and right gates are paved with black bricks. There are a pair of stone elephants and drums set before the gates. Only well-off houses can afford this type of construction. The main hall of the clan hall is a combination of a beam-lifting type and column-and-tie structure. The pediment is 20 meters in height, depth and width. All the bases of the hall columns are stone drums. The back pediment is in the shape of half round cloud shape (like a cat that is hunching over). The black stone in front of the main hall is very grand and majestic. 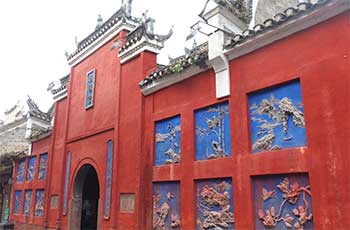 Chaoyang Ancestral Hall, also known as Chen Clan Hall, is the best-preserved modern clan hall architecture in Fenghuang. Located on the northwest side of the ancient city, it was initiated in the fourth year of the Republic of China (the state prior to the People's Republic of China [1949-present]) by King of Xiangxi (addressed by local gentlemen) Chen Quzhen's brothers, Chen Kaibing and Chen Kaifan. In 1923, the construction was completed by General of Xiangxi, Chen Quzhen. The gates, the main hall, the drama stage, the boxes at both sides of the stage, the kitchen and the other rooms are all finished. The typical quadrangle dwellings of southern China style were an important venue for the Chen Clan to enjoy Chinese operas or carry out events.
The whole building has green multiple tiles, flying squats and three layers of underarm arches. There is a colorful calabash on the top of the room. The symmetrical architecture is considered to be very excellent.

4．The Museum of Ancient Town

The Museum of Ancient Town, which is also the century-old house of Chen Baozhen's family (Chen Baozhen, Governor of Hunan Province, was a Chinese statesman and reformer), is located right in the center of the ancient city. The stone slabs that connect east and west county are right in front of the House. After a hundred years of construction, the intact construction layout and the history of Chen Family is well preserved. There are houses and pavilions in the quiet country yard. 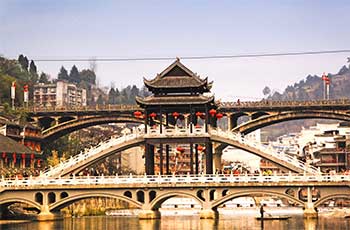 Hongqiao, formerly known as Reclining Rainbow Bridge, and also known as "House of Wind and Rain", was built at the beginning of the Ming Dynasty, the one prior to the Qing Dynasty.People may find it convenient to reach any corner of Fenghuang from the Bridge.

From Rainbow Bridge, the whole of Fenghuang can be seen against the background of the beautiful Tuo River. Hongqiao is divided into upper and lower floors. Shops and grocery stores are on the lower floor and folk contents can be found on the second floor. Paintings and calligraphy works about Rainbow Bridge since the old time can be found. It is a good place for sightseeing and drinking tea.

The former residence of Shen Congwen is located in Zhongying Street in the ancient city of Fenghuang. This courtyard house with rich characteristics of Xiangxi is the place where Mr. Shen Congwen was born. The architectural style is from the Ming and Qing Dynasties. When Shen Hongfu (previously Guizhou Provincial Commander-in-chief of Qing Dynasty), Shen Congwen's grandfather bought an old civil house, he demolished the old construction and built a new one with fire-clay bricks in 1866. The courtyard houses are divided into the front and back part. There is a red stone paved square in between. A total of 8 rooms are built along the two sides of the courtyard. The column-and-tie structure is used for all rooms and the structure applied to the walls. Wharf Walls decorated by the head of the legendary turtle and the beautifully carved doors and windows are antique. Photos in the former residence tell the chronicles of Mr. Shen Congwen. Formerly known as the “Culture Temple of South China”, numerous literary enthusiasts come here to pay their tributes. Shen's works sold here will be stamped with the commemorative seal of the former residence. 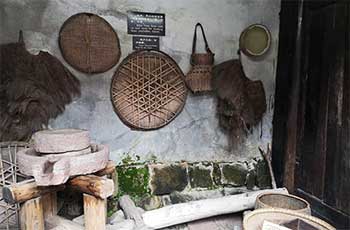 Xiong’s former residence is located even closer to the bank of the Tuo River. It is in a typical Miao ancient architectural style where there are many Miao folk elements. This medium-sized courtyard is very quiet and peaceful. There is a square in the center. Objects used by Xiong Xiling are demonstrated in three two-story wooden rooms.

On the left side, there is the living room of about ten square meters, and on the right side, there is the firewood house where utensils such as stone mills and stone plaques are placed. Xiong Xiling (1870-1937) was born and bred in Fenghuang. He was considered very intelligent when he was a kid. And he became the first elected Prime Minister of Republic of China. The house that was once home to the first Prime Minister looks ordinary. But the tales therein are legendary.