The Balagezong Grand Canyon is located in Nishi Township, northwest of Shangri-La, Yunnan Province. It is connected to the Sun Valley in Derong County, Sichuan Province in the west, and connected to the Birang Canyon in Gezan Township in the east. From Shangqiaotou to the north through Dongzhulin temple and the Baimang Snow Mountain, you can reach Deqin Meili Snow Mountain. Basically, it is located in the center of the Yunnan-Tibet-Sichuan Delta, which together with the Birang Canyon forms the Shangri-La Grand Canyon. There are many scenic spots in here, integrating snow-capped mountains, canyons, glaciers, rivers, plateau lakes and primitive forests. There are also holy villages such as Bala Village, Millennium Phoenix Bodhi Tree, Shambhala Pagoda, etc.

Highlights of the canyon 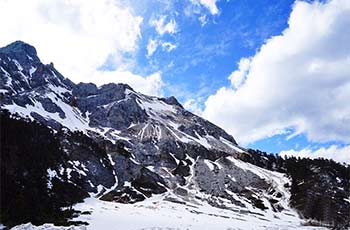 Gezong Snow Mountain is located at the junction of Shangri-La City, Diqing Tibetan Autonomous Prefecture, Yunnan Province and Derong County, Ganzi Tibetan Autonomous Prefecture, Sichuan Province. The highest elevation is 5,545 meters. It is the first peak of Shangri-La and the largest mountain in the scenic area. The slope is large and steep. The residents in the Tibetan area protect the mountain from tourists’ exploration for religious reasons. There is no climbing record until 2018.

Bala means a village that a Tibetan immigrated to from Batang. This village is located on the half mountain over 2900 meters above sea level.

The stupa group is composed of eight holy white pagodas, which are dedicated to the most representatives of Tibetan Buddhism: Buddha Sakyamuni, Master of Lotus, Longevity Buddha, Four Arms Guanyin, Manjusri Bodhisattva, Huang Caishen, Zunsheng Buddha, and Tara. These eight pagodas represent the eight treasures of the Tibetans, giving the Bala people good fortune and a happy life. 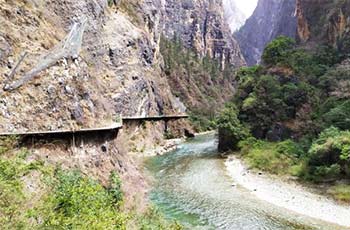 The Shangri-La Grand Canyon is one of the deepest canyons in Yunnan and even the whole country, with a total length of about 154 kilometers. The gorge is known as ‘high-risk, odd-shaped, and mysterious’. ‘There are gorges in the gorge, there are gorges on the gorge, crossing, and connecting’, this poem concluded the biggest feature of the Shangri-La Grand Canyon. There are hundreds of sides on the main canyon. There are many gorge valleys. These gorges are mostly typical glacial water gorges. The glacial water gorges are mainly distributed on high-altitude snow-capped mountains. Because of the unique geological features (karst landforms) here, low-altitude glacial water canyons are formed.

Tongtianxia is a large gorge of the Shangri-La Grand Canyon. It is about 4,000 meters long from the bottom of the valley to the top of the gorge. The canyon is U-shaped, and the distances to the two opposite mountains are similar. The cliffs on both sides are in the shape of a curtain. All reach 1 kilometer and are straight up to the sky. Because the gorge is too deep and too narrow, the bottom of the valley looks dark. You will feel like walking in the magic road of underground purgatory, and if you shout loudly inside, it echoes constantly. Looking up from the bottom of the valley, the cliffs on both sides look like they are supporting a line of blue sky, forming the spectacle of ‘the first line in the sky, the two mountains and the steep stone as the door’. 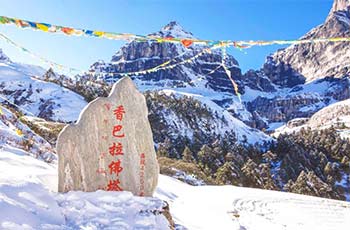 The Shambhala Pagoda is located in the northeast of the Gezong Snow Mountain. The natural pyramid-shaped mountain peaks are covered with snow and can be seen towering under the sky. Next to it are the Lama Squatting Statue and the Classics Statue. They are also called the Three Treasures of Buddha, Statue, Classics and Monk. It is the phoenix stupa predicted by Buddha after the Buddha became immortal. At the same time, the Shambhala Pagoda is a mysterious and holy natural stupa recorded in the Tripitaka. Its mouth is 4,250 meters above sea level. It attracts countless devout people to worship and pray for spiritual wishes.

Naidang Ranch is the closest pasture to Gezong Snow Mountain. It is surrounded by mountains, green grass, abundant rain, and beautiful cows and sheep. Beautiful scenery and a pleasant climate are the two features here. Almost every family in the village of Bala has a small bunker-style building with a height of three or four meters. The house is divided into two floors. The lower floor is a barn, the upper floor is a house. A single wooden ladder makes it possible to go up and down between the floors. The stone houses are each detached from their neighbors. After years of development, a ranch village consisting of small stone-built bunker-style buildings on the subalpine meadows has been formed. 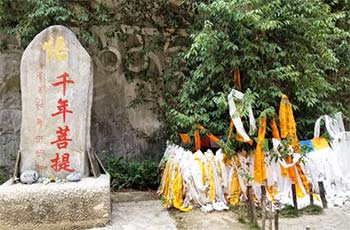 The Tibetan Culture Expo Center is a Guanyin Temple built after Tussna Dorje, which was built more than 1300 years ago. It was rebuilt on the original 21-degree Tara Classics Hall. A total of 21 statues of Tara are displayed in the temple. They are a group of goddesses who have saved the sufferings of all beings. They are also the female devotees worshipped by the sects of Tibetan Buddhism. Therefore, the 21-degree mother is widely worshipped by the majority of believers and the people in the Tibetan Buddhism area. It has great regional influences. It is the venue for festivals and worshiping Buddha on 15th of the first lunar month. According to the old site structure, it is divided into two floors. The first floor worships the main Buddha of the Thousand Buddhas which is the Buddha of the Infinite or the Amitabha Buddha.