Baishuitai is a natural feature and tourist attraction in Sanba Township, Shangri-La County, which is 100 kilometers away from Shangri-La town. According to legend, the Naxi god used his magic to make this terrace in order to let the local Naxi people learn farming and cultivation. Later generations called it ‘the fairy land’. Baishuitai is a holy place for Naxi Dongba religion. According to legend, Dongba Ancestor became immortal in Baishuitai. This place was thus regarded as the Dongba Bodhimaṇḍa by the Naxi people. 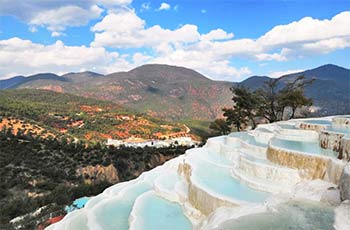 Looking into the distance from Baishuitai, the shape of the Green Mountain is like layers of terraced fields. Under the sun, it looks like a frozen waterfall in a photograph. On the lower left side of the river, there is a stone sarcophagus, white as milk, shaped like a pregnant woman. It is the place where the local people worship the reproductive god. The Baishuitai is not only a beautiful place, but also the birthplace of the Naxi Dongba religion. People hold religious events here. Baishuitai is an important tourist attraction on Diqing Plateau. Stepping onto the terrace, you can see the layers of white water. It is like a sliver of the moon fallen to the earth, and like the silver accessories of the Naxi girls. The terraces are stacked into a myriad of silver rings, shining towards the glory. On the left side, a spring is shaped like a crescent moon, and the spring is overflowing. It is said that the spring was the dressing place for the fairies. The Naxi residences, costumes and handicrafts near Baishuitai are also unique and distinctive.