One of the Buddhist Pilgrimages in South Fujian

South Putuo Temple is located at the foot of the Five Old Peaks, covering an area of 258,000 square meters and with a floor area of 21, 270 square meters. Built in the late Tang Dynasty, South Putuo Temple was originally named Sizhou Temple, and was renamed as the Puzhao Temple in the Song Dynasty. In the first year of the Ming Dynasty, the temple was deserted, and it was not rebuilt until the reign of Emperor Kangxi in the Qing Dynasty. Like Putuo Mountain in Zhejiang Province, the temple was built to enshrine Guanyin Bodhisattva, and its location is in the south of Putuo Mountain, and therefore it gained its name as “South Putuo Temple” and visiting it has become one of the Buddhist pilgrimages in southern Fujian.

Every year, South Putuo Temple draws streams of visitors from home and abroad to worship Guanyin Bodhisattva here. South Putuo Temple has a thousand-hand Buddha made with fine workmanship, and rich and colorful collections of Buddhist cultural relics.

Highlights of the South Putuo Temple 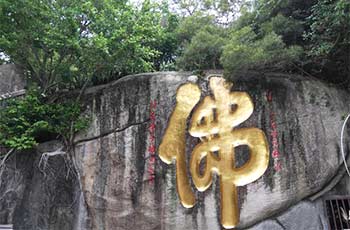 All the buildings in the temple are covered with the ancient palace-style roofs decorated with glazed tiles of ginkgo color. The whole temple is surrounded by stone walls to make it as an entirety. Sutra depository is the tallest building in the central axis. It is a pavilion in a mountain double-hipped roof type with double stories, with one for the dharma where monks expound the texts of Buddhism, and the other for the Jade Buddha where there are 28 Myanmar Jade Buddha statues and tens of thousands of volumes of ancient and modern, Chinese and foreign, Buddhist scriptures and some precious cultural relics.

You can find numerous inscriptions preserved in the South Putuo Temple, including an inscription of Chendi from the period of Emperor Wanli in the Ming dynasty, a stone carving of Shen Yourong, and the imperial monuments of Emperor Qianlong of the Qing dynasty. The cliff behind the temple is carved with the Chinese character, "Buddha”, with a height of about 4.6 meters and width of 3 meters.

On February 19th, June 19th, and September 19th in the lunar calendar each year, Grand Buddhist activities are held to celebrate the day when Guanyin became a god (Avalokitesvara). Many devout men and women holding burning incenses kowtow to Guanyin praying for health and wealth. 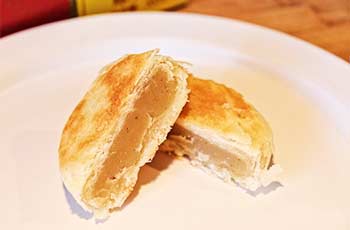 The vegetarian dishes of the South Putuo Temple are famous at home and abroad for their pure and simple flavor. The dishes are cooked according to the strict requirements of the vegetarian recipes, using only vegetarian ingredients. Chefs there pay great attention to the color, fragrance, taste and appearance of the dishes, as well as the tableware. Each dish has a graceful name, such as "Golden Lotus of the South China Sea", "Scented Mud Hidden Jane", "As You Wish", "Silver Snow as Waves", "White Wall and Cloud", "Halogen Gingko", "Half Moon Sank under the River", etc., which are full of joy.