Hulishan Fortress in Xiamen is a National Level Relic and a AAAA (4A rate) scenic area. The Fortress was built in 1894. Its construction area is 70,000 m2 and the floor area is 13,000 m2, offering places for a battlefield, a barricade and an area at the rear. The artillery is half fixed on the ground and half covered by the parapets. It features both European style and the Chinese style of the Ming and Qing Dynasties. Hulishan Fortress was erected from the Westernization Movement from the Qing government (resembling Meiji Restoration by its neighbor, Japan). It has the nickname of The Pass of Min (Fujian Province) and the Lock of the South Gate of the country. 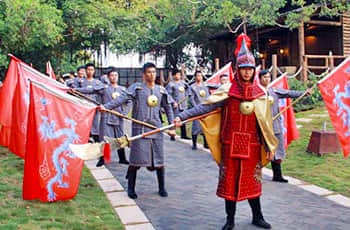 The Fortress that was built 100 years ago has become a popular scenic area for tourists to Amoy. The gun salute conducted each morning at 08:30 is to express a feeling of gratitude for guests. The welcome ritual restores the scene where the commander-in-chief of the Fujian navy orders the soldiers to open the gate and dance to welcome the guests. In the parade, military prowess is demonstrated as the Fortress is the Pass of Min (Fujian Province) and the Lock of the South Gate of the country. 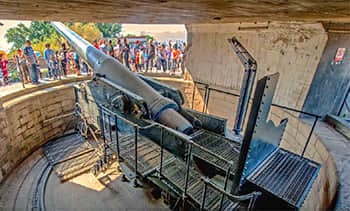 The 280mm Krupp gun bought from Germany in 1893 is well preserved. Its maximum range is 19760 m (effective range of 16,000 m). The government then paid 100,000 liang, which was a silver unit used during the Qing Dynasty. Note that in the Treaty of Nanking, signed in 1942 following the first Opium War between the British government (House of Hanover) and the Qing Dynasty, the war indemnity was 21,000,000 liang (freight and marine insurance included). It holds the Guinness Record for "the largest and oldest on-shore gun in the 19th century".

This demonstration is the only one that is conducted as the military standard in China. The de facto load and projection of the gun is exhibited. 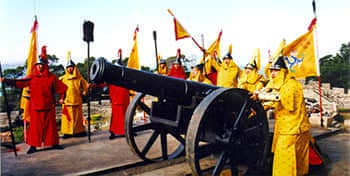 Every day at 10 o'clock and 4 o'clock, tourists may see the Hongyi Gun Drill with their own eyes. Each drill lasts 16 minutes. The original army that conducted such a drill was the Plain Red Banner army and the Plain Yellow Banner. In the music, the vision of the actors in Eight Banners military uniforms with mail body armor, helmets, sabers, as well as battle drums and dragon banners offer a recap of the load and projection of the Hongyi gun in the Qing Dynasty.
Tips: It is free to take photos with the actors when the drill is over.

To represent the glorious history of Hulishan Fortress and highlights of its place as the command center, in the Military Hall, a model that resembles the Commander-in-chief Yang Qizhen is placed. The model shows what Yang did when he inspected the Fortress, directed the battlefield in 1896 and helps to picture scenes of life at that time.

The 4D film mainly shows the battle of soldiers on Xiamen Harbor Fortress in the Opium War. The immersive battlefield brings a visual impact to the tourists. In addition to the 3-dimensional image, the splashing waves, the choking smoke and the smell of gun powder can be heard and smelt. 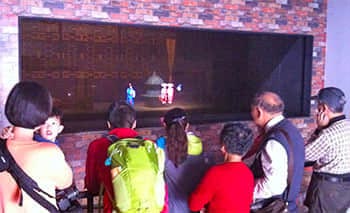 The play of the phantom projection is to inform about the scene of the Pass of Min (Fujian Province) and the Lock of the South Gate of the country as in defending Xiamen Harbor in the Anti-Japanese War. The power of the Fortress and the Krupp gun are highlighted. The scenes include the construction of the Fortress, the transportation and installation of the Krupp gun and the firing of the gun.