How to Plan a Tour of Tibet

Home » China Guide » How To Plan A Tour To Tibet

The Tibetan Plateau, with an altitude of more than 4000 meters, is sometimes called the “roof of the world”. With holy monasteries, glacial lakes and the world's highest mountain range, the Himalayas, any one of these could be the perfect reason to make a trip to the wonderland of Tibet.

The Best Time to Go

The best time to go to Tibet is from June to September when it is warmer. However, it is also fine if you travel during winter. Traveling in winter not only saves dollars on hotels and flights, but also avoids the possible crowds at popular sites. While up in the highlands, the daily sunshine hours are long, and it is usually warm by day and chilly by night. Wearing layers with sweater inside and a waterproof jacket outside works great against the highland cold and windy weather in Tibet, and don't forget your sunglasses and sun screen at all times!

Note: Considering bad weather might occur and safety concerns, Tibet has closed to overseas travelers from Jan. 31 to Mar. 31 annually since 2008.

Potala Palace: Being built on the mountain, Potala Palace is by far the highest architecture in the world as a grand combination of a palace, a castle and a monastery. The Palace consists of the red palace and the white palace with a total of 2000 rooms. It is about 200 meters high, with 13 stories accessed from the outside and 9 more stories accessed from the inside. It was built when the Tibetan King Songtsam Gambo married Princess Wencheng and Chizun in the Tang Dynasty. PotalaPalace was later used as Dalai Lama's winter palace, andit was also the center for holding big religious events and political ceremonies. Tibetans come daily to pay their respect by circling the palace and adding ghee to the lamps. 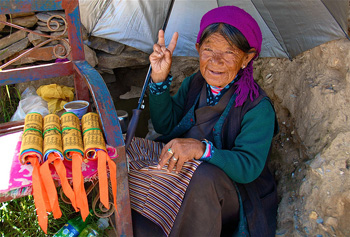 Jokhang Temple: It is believed by Tibetan people that Jokhang Temple comes before Lhasa city, which shows the fact that Jokhang Temple is not only geographically in the center of the city, but also spirituallyimportant in every part of Tibetan's lives. The ancient Temple was firstly built for displaying a life-sized statue of Sakyamuni at the age of eight. Today many pilgrims from home and abroadcan be seen in front of the Temple, kneeling down on the pavement, or prostrating themselves in honor of their religion. 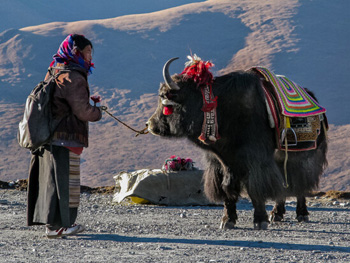 Sera Monastery: Sera Monastery was built on the north of Lhasa. The name Sera comes from the many wild jujube trees in the mountain. The Monastery was constructed by Jamchen Chojey, student of the founder of Ganden, thus the Monastery is one of the six greatest Ganden monasteries. More than 10,000 Buddha statues could be seen along with other treasures like the first Buddhist writings in the Tibetan language, and jewels from emperors of the Ming dynasty.

Yamdrok Yumtso Lake: Nicknamed as Swan Lake, Yamdrok is regarded as one of the threesacredlakes in Tibet,it is also the biggest fresh water lake in Southern Tibet. The lake is surrounded by snow-cappedmountainsmirrored on thecrystal clear blue water, offering a great photo opportunity.