Built in A.D. 1419, Sera Monastery is located at the foot of Sera Uzbek mountain, known as the “Wild Rose Garden of Tibet”. It is the second largest monastery in Tibet and is considered one of the three major monasteries of Lhasa together with Drepung Monastery and Gandain Monastery. Sera Monastery stores the Tibetan Buddhist canon, the first that adopted woodblock printing, and the collection highlight of the monastery, “Hayagriva Thangka Buddha”. The monastery buildings all reflect Tibetan style. Its main hall is very grand and resplendent. The monastery enshrines tens of thousands of Buddha statues, most of which are produced in Tibet. In the main hall and on the walls of all Dratsang scripture halls are preserved a large number of original frescos, scriptures, exquisite Thangka, barbola and other rare art treasures. As well as all those collections, you can enjoy Lama debating on Buddhist doctrines in Sera Monastery, which is the most famous activity in the Monastery. 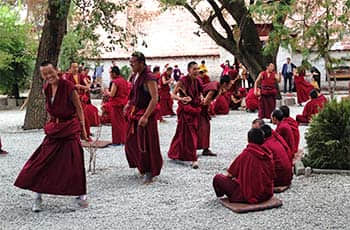 Debating on Buddhist doctrines is very famous in Tibet and is also the travel highlight in Sera Monastery. Debating is carried out on the northernmost debating field from 3 pm to 5 pm, excluding Sunday and special holidays.

Debating is about the discussion of Buddhist doctrines and also a way to learn from Lamas. It is a challenging activity. Both parties are so engaged in a battle of words that they use various gestures to articulate their point by either clapping hands to urge others to answer questions as soon as possible, or pulling beads as a way to enlist the help of Buddha to defeat the other party.

While walking around the monastery, you can appreciate the buildings along the way. With a total length of about 1.5 kilometers, Tsochin Hall is the center of Sera Monastery and is surrounded by multiple buildings of Dratsang, of which the most famous are Hayagriva Hall and Tsochin Hall.

In Hayagriva Hall there is enshrined the most famous statue of Sera Monastery, the statue of Hayagriva, the Guardian God of Tibetan Buddhist tantra who has the power to drive out evil spirits. It is said that the Hayagriva statue was found because Tsongkhapa, founder of the Gelugpa Sect, heard the neigh of a horse when he was on a walk, and was considered to have the power of driving out evil spirits according to the legend of Tibetan Buddhism. This is also a travel highlight of Sera Monastery. You can join the believers to pray for good luck to block evil spirits.

The central Tsochin Hall is the largest building in Sera Monastery. Supported by 108 columns, it can accommodate more than 8,000 monks when religious ceremonies are held. The statue of the founder of the monastery Byams-chen-chos-rje is enshrined in the hall. The hat on the statue is very unique with Sanskrit writing on it. It was given by Yongle Emperor of Ming Dynasty when he delivered sermons there.

Climbing the mountain and enjoying the panoramic view of Lhasa

1) Every year on December 27 of Tibetan calendar, Vajra Pestle Blessing Festival is held in the monastery when the vajra pestle blessed by Dalai Lama will drive out evil spirits for believers. On that day, many believers will come to attend the ceremony. Tourists can also pray for good fortunes to block evil spirits.

2) According to the sadhana of Tibetan Buddhism, one should walk around the monastery and hall, and turn prayer wheels clockwise.

3) Respect the creeds of the local people. Do not point at Buddhas. Take off hats and keep quiet after entering the hall. Do not take pictures.

4) Many halls will be closed after 3 pm. You’d do better to visit in the morning or noon and watch the debating in the afternoon.

5) Try to keep quiet when watching or taking pictures of the debating. Keep a distance when taking photos so as not to disturb the monks too much.

6) The altitude of Sera Monastery is relatively high. Tourists who come to Lhasa for the first time should not do strenuous exercise to avoid altitude sickness. Always act within your physical capability when you climb the mountain behind the Sera Monastery. Do not insist on reaching the top.