Located on the red hill in the northwest of Lhasa, capital of Tibet, Potala Palace is a grand architectural complex of palaces, castles and temples which is at the highest altitude, of the largest scale, and is the most well-preserved.

Potala Palace is one of the symbols of Tibet and also the sacred place of all Buddhist pilgrims. In Potala Palace, you can appreciate the collection of a great number of historical relics, wonderful architectural art of Tibetan nationality and accept baptism of the soul in the holy atmosphere. 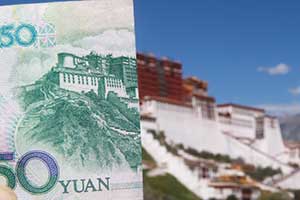 Potala Palace is the landscape printed on the back of RMB 50 note. Its main building is made of white and red palaces. The 200-meter-high palace seems to have 13 stories if viewed from the outside, but it actually has 9 stories in total. Potala Palace Square is in front of Potala Palace. It is the world's highest city square.

In A.D.641, Songtsen Gampo married Princess Wencheng and built Potala Palace for her on the red hill in the northwest of Lhasa. With the demise of the Tubo Dynasty, the palace was destroyed and only Sacred Guanyin Palace and Dharma Cave were preserved. In A.D.1645, Dalai Lama V spent 5 years reconstructing Potala Palace, with 3 years spent on finishing the construction of the White Palace. Thereafter, major religious and political ceremonies were held here. Potala Palace became the Winter Palace of Dalai Lama and also the dominion center of caesaropapism (where the head of state is also supreme head of the church) in Tibet. 42 years later, after the death of Dalai Lama V, Prince Regent Degsi Sanjay Gia Zo built the Red Palace. Later on, Dalai Lama XIII built the East Sunlight Palace in the east of the original West Sunlight Palace at the top of Potala Palace and finally completed the construction of Potala Palace which, since then, has lasted several hundred years.

Potala Palace has a large collection of historical relics, including pagodas, statues, murals, Thang-ga and scriptures, as well as golden books, jade books, gold seals, gold and silver wares, jadeware, chinaware, Enamel and rare curios of Darai Lama awarded by emperors of the Ming and Qing Dynasties, which shows the friendly relationship between the Tibetan local government and the central government in history. Among all the collections, the most eye-catching ones should be the eight pagodas of all Darai Lamas since the fifth generation, which are really a palace of art.

The best spot for taking pictures of Potala Palace 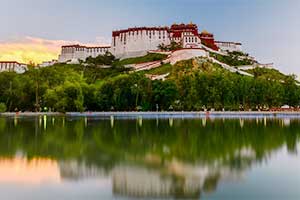 the inverted image of the Potala Palace

1) The tickets to visit Potala Palace are limited and in high demand, especially in summer. There is also a limitation on the number of people in a tour group, which is limited to 7 persons. If there are more than 7 persons, the group will be split apart. For groups with less than 7 persons, people from other groups will be transferred to meet the requirements.

2) You have to avoid all the taboos of Tibetan Buddhism when visiting Potala Palace. You are not allowed to wear hats, sunglasses, and especially skirts. Visitors who wear skirts will be asked to put on pants if they are to enter the hall. No photos in the main hall. No trampling on the door threshold.

3) You will undergo strict security checks before you are allowed to enter Potala Palace. Restrained knives, flammable and explosive goods, and drinks are not allowed to be brought in and large packages may also need to be opened for inspection.

4) The toilets are only on the right side of De Yang Xia Plaza at the ticket office. There are no other toilets along the scenic route which lasts about 30 to 40 minutes. So you have to prepare for that.

5) Night lights of Potala Palace will turn off at 22: 30. You have to arrive before this time if you want to take pictures of the nightscape.