The Largest Monastery in Tibet

There are many large monasteries, each with their own characteristics in Tibet. One you definitely should not miss is Drepung Monastery. It holds the highest status in the Gelugpa Sect of Tibetan Buddhism. It is located on Genpei Uzbek Mountain, 10 kilometers from the western suburbs of Lhasa and 3,800m above sea level. Covering an area of 200,000 ㎡, it is the largest monastery in Tibetan Buddhism. Consisting of seven monasteries, it was home to nearly 10,000 monks in its heyday. All the buildings in the monastery have white walls, golden roofs and red eaves, featuring the architectural style of Tibet.

The interior of each hall is grand and majestic. The most important building, Tsochin Hall, covers an area of under 2,000㎡and is supported by 183 huge, delicately-carved wooden pillars. You can enjoy numerous, solemn Buddhas and a large collection of exquisite Thangka, barbola, murals and other rare art treasures. 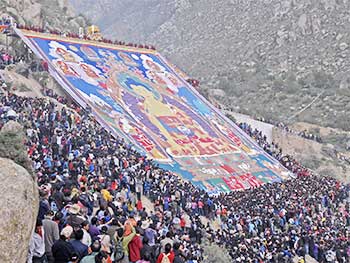 During the Shoton Festival at the end of June in the Tibetan calendar, a grand Buddha exhibition ceremony is held in Drepung Monastery. The statue of Buddha, with a size of 30m-20m, exhibited on the platform accompanied by Tibetan opera makes it one of most magnificent sights in Lhasa, which is even more grand than the Tibetan New Year. This is also the best time to photograph Drepung Monastery.

When you come to Drepung Monastery, the one thing not to miss is the grand debating ceremony in the afternoon. The most common form of debate is bilateral debating. Monks debate in pairs, one sitting on the ground and the other standing opposite, debating with exaggerated and dramatic gestures, which is very interesting to watch. There is also group debate where one lama will debate against several lamas.

1) According to the sadhana of Tibetan Buddhism, one should walk in the hall or turn the prayer wheels clockwise.

2) Respect the faith of local people. Do not point at Buddhas. Take off hats and keep quiet once you are in the hall. Do not take pictures. Do not photograph believers walking around the monastery unless you have their permission.

3) Drepung Monastery is about 3,800 meters above sea level. Tourists should try not to do strenuous exercise in order to avoid altitude sickness.

5) Drepung monks are friendly and will show tourists around and explain at their convenience. You may ask whether they are available when buying tickets. If you are lucky to have monks accompany you, you can learn more about Drepung Monastery.