Barkhor Street is the most classical ancient street representing the folk customs of Tibet and has been included in the “ten most famous streets of history and culture in China”, thanks to its high cultural value and long history.

Here in Barkhor Street you can not only buy local specialties but also experience the most representative folk customs and enjoy the distinctive ancient architecture of Tibet, which makes the street a must-visit place in Tibet.

When the circumambulation hour comes at dusk, all believers begin to walk along the ring road of Barkhor Street clockwise. 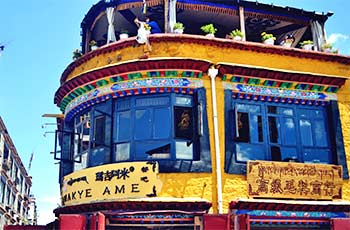 Most buildings in Barkhor Street are white except for one two-story house at the southeast corner of Barkhor Street, which is painted yellow. Everybody who has a certain knowledge of history and literature of Tibet will know Tshangs-dbyangs-rgya-mtsho, who was not only an outstanding religious leader in the history of Tibet but also a brilliant romantic poet. The legend has it that the yellow house where the Makye ame pub is located is the place where Tshangs-dbyangs-rgya-mtsho met Makye ame and wrote the famous poem “On the Summit of the East”.

In No. 24 courtyard of Bakuo North Street stands an ordinary two-story building named “Qujie Podrang”, which is the renowned “Buddha Palace”. It comes first in the four major palaces and is also the first house in Barkhor Street. It is a simple palace which Songtsen Gampo built for himself before the construction of Jokhang Temple.

Mu Lu Ning Ba is in No. 10 courtyard of the northwest lane of Octagon North Street. It was built to provide accommodation for monks and lamas who come to worship Buddha in the Jokhang Temple. As the number of monks increased, another Muru Temple was built later. Nowadays, Mu Lu Ning Ba has become a home for general residents and there are few monks who live there.

Sera Da Kuo is a worn wooden gate on the west of the old Muru Temple gate and used as the exclusive entrance of Sera Monastery lamas. The gate faces the life-sized statue of 12-year-old Shakya Muni in Jokhang Temple.

Tuba is an ancient building which is located at the southern end of Barkhor Street. The three-story building is the mansion of Thonmi Sambhota, the most prestigious minister under the reign of Songtsen Gampo, and inventor of Tibetan characters. Now it is the site of a neighborhood committee of Barkhor Street. 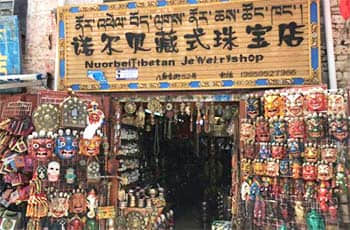 The store of the featured souvenirs

Tibetan carpets, knives, card pads, aprons, national costumes, shoes, hats and jewelry are all traditional handicrafts with distinctive local style and characteristics. Barkhor Street is the most famous small commodity street in Lhasa where you can buy various featured souvenirs. Tips: If you have bought Tibetan knives, you cannot carry them with you on to the plane or trains. You can however mail them from the post office. Beijing Middle Road Post Office to the north of the pedestrian street is the General Post Office of Lhasa, where you can find an express post service.