Rising 632 meters (2,073.5 feet) and 127 floors into the air, Shanghai Tower is the tallest building in China and the second tallest in the world (as of 2022). Designed by the American Gensler Architectural Design Office, Shanghai Tower spirals its way up, resembling the shape of the traditional Chinese dragon, signifying the dynamic economic rise of modern China. The building can be divided into 9 areas vertically, the first 5 floors are used for retail space, and office space occupies from the 8th floor to the 80th floor. The hotel occupies the 84th floor to 110th floor, the next 7 floors above are the boutique office floors, and the uppermost 10 floors over 117th floor are for observation and mechanical uses. The observation decks are the 118th floor and 119th floor, providing 360-degree views of the city. On the 121st floor, is an open-air observation deck where visitors walk among the wind turbines that are integrated into the building’s crown.

Shanghai Tower is one of the most advanced sustainable tall buildings in the world, designed to achieve both LEED Platinum Certification and a China Green Building Three-Star rating. It employs several different strategies to save energy, including water conservation practices and integrated landscaping. The building’s transparent second skin provides insulation, reducing the need for heating and cooling, while the use of glass limits the need for electric lighting. Two hundred and seventy wind turbines at the top of the building provide power for the exterior lighting of the building, and a 2,130-kW natural gas-fired cogeneration system provides electricity and heat energy to the low-zone areas. 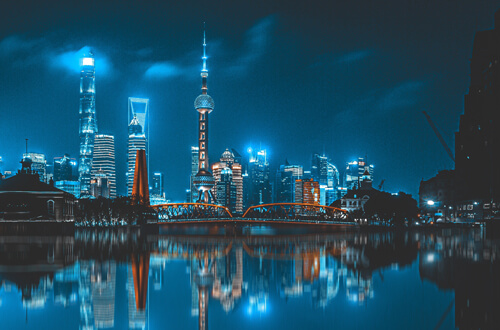 On November 29th, 2008, the construction of the pile foundation for Shanghai Tower’s main building started, and on March 12th, 2016, the whole building was officially completed. On April 27th, 2016, Shanghai Center held a ceremony to unveil a wall of honor on which the names of all the builders of the tower are inscribed, and announced the trial operation of the Shanghai Tower. On April 26th, 2017, the sightseeing hall “Shanghai Summit” on the 118th floor was officially opened to the public.

1. Preface Hall on B1 Floor

The Development of Skyline: A 100-second-long live-action flash explains the development of the skyline of the Bund, Pudong, and Lujiazui over the past 170 years since Shanghai opened its commercial port in 1840.

Skyscraper Dream: The exhibition hall illustrates the history of how the height of the world's tallest building had continued to be renewed since 1885, which shows the ambition of human mankind to build higher and higher skyscrapers.

Vertical City: With the help of the cutting-edge 3D printing technology, the “vertical city” exhibition area demonstrates rainwater collectors, the double glass curtain wall, BIM construction technology, Shanghai girls, pictures of fish, the joy of Shanghai center, and other green, intelligent and cultural matters which are in line with the philosophy of the vertical city.

2. Guanfu Museum on the 37th floor – One of the first private museums in China

Founded by famous collector Mr. Ma Weidu, the museum offers five distinct galleries (four permanent and one temporary) filled with Chinese antiquities, where visitors can enjoy over 500 artifacts including gold, Buddhist art, furniture, silk, and an especially impressive ceramic collection from the Song Dynasty (960-1279). The museum also boasts a rather spectacular 480-square meter ballroom with an enamel floor, which entered the Guinness World Records as the World’s largest, taking 321,681 hours to complete. The entrance fee is 100 yuan.

The Chinese name for the garden is “ban mu yuan”, due to the garden having a total area of 384 square meters, which is about half of mu (Chinese unit of land measurement, about 666.5 square meters). It is the world’s highest Chinese traditional garden, where the antique views are perfectly mixed with the modern.

J Hotel Shanghai Tower is located from 86th to 98th floor. Its rooms vary from 61 square meters to 380 square meters, making them some of the highest and most spacious options in Shanghai. Hotel guests will have access to Shanghai's diverse and spectacular urban scenery, including the Huangpu River, the Bund, and the Oriental Pearl Tower. 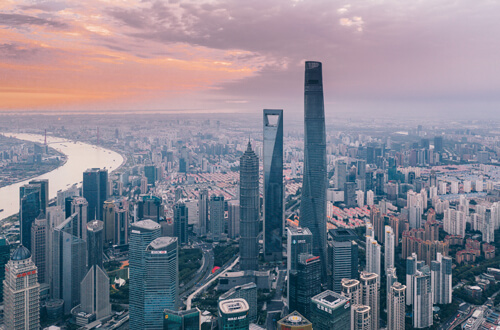 Sightseeing: In the “Shanghai Summit” 360-degree full-view Sightseeing Hall, you can not only enjoy the view of the Oriental Pearl, Jin Mao Tower, and Shanghai World Financial Center, but also have a bird’s eye view of the Expo Garden, Town God Temple, Shanghai Stadium, Hongqiao Airport, and see the Suzhou River and Huangpu River winding their way to join the Yangtze River and that runs into the East China Sea.

Post office in the Sky: In the post office you can select a postcard to write to yourself, your relatives or friends. The message sent from Shanghai Summit is a gift worth keeping. The post office is the highest in the world.

Wishing Tree: There is a wishing tree in the Sightseeing Hall. You can write a wishing card (18 yuan or US$2.8) and hang it on the tree.

Fastest Elevator in the world: The 18m/s (40mph) high-speed elevator takes a mere 55s from the ground floor to the Shanghai Summit Sightseeing Hall on the 118th floor.

Together with Ping An Finance Center observatory in Shenzhen, It is the highest viewing floor in the world.

Shanghai Eye is a dampening system located on the 125th and 126th floors. The dampening system weighs 1,000-ton and is designed to absorb the violent shocks of an earthquake. The device is hung in the air with 12 steel cables and works as an automatic clock pendulum with a sway range of 2 meters in all directions. Tourists can explore it through interactive hi-tech device