Shanghai Museum is a large Chinese museum of ancient art. It has a round dome and a square foundation, reflecting the ancient idea of “the round heaven and the square earth”. Its display area is 2,800 ㎡. It treasures 140,000 precious cultural relics, especially featuring bronzeware, chinaware, calligraphy and paintings. Known as “half of the cultural relic field”, it enjoys a great domestic and foreign reputation for its abundant collections.

Shanghai Museum has 12 special exhibition halls, that is, the Bronzeware Hall, the Ceramics Hall, the Paintings Hall, the Calligraphy Hall, the Sculpture Hall, the Coin Hall, the Jade Hall, the Furniture Hall, the Royal Seal Hall, the Hall of Ethnic Minority Arts and Crafts, the Porcelain Display Hall, and the Western Art Hall donated by Hu Huichun.

China has a history of over 3000 years of using metal coins. Shanghai Museum has collected a relatively complete set of Chinese ancient coins. It has not only collected copper and iron castings from the dynasties, and golden coins from the Warring States Period, but it also exhibits the gold, no-printing version of golden and silver coins of the Ming and Qing Dynasties, and golden and silver coins of various countries along the Silk Road. Through simulating the coin casting process with plaster, it introduces the basic method of ancient ceramic casting. 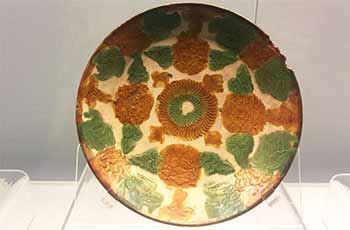 the exhibit of the Creamics Hall

Altogether it displays over 500 exhibits in the area of 1,300 ㎡. Among them are colorful and grey ceramics of the Neolithic Age, primitive celadon of the Shang and Zhou Dynasties, the Spring and Autumn Period, and the Warring States Period, celadon of the Eastern Han Dynasty, and tri-color glazed ceramics of the Tang Dynasty. Jingdezhen was the center of Chinese porcelain industry during the Yuan, Ming and Qing Dynasties. Its ceramic products of underglaze color, overglaze color and colored glaze are also exhibited in the Hall.

3. The Furniture Hall of the Ming and Qing Dynasties

The Furniture Hall displays over 100 pieces of quality Chinese furniture from the Ming and Qing Dynasty covering an area of 700 ㎡.

4. The Hall of Ethnic Minority Arts and Crafts 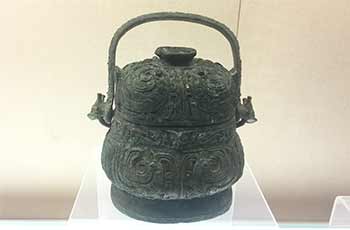 the exhibit of the Bronzeware Hall

The Hall displays nearly 600 pieces of clothing, dyed embroidery, metal casting, carving, pottery, lacquerware, woven cany bamboo, and the masks of ethnic minorities in the area of over 700 ㎡. All these demonstrate the wonderful style of the crafts of ethnic minorities.

The Chinese Ancient Bronzeware Hall displays over 400 pieces of exquisite bronzeware in the area of 1,200 ㎡. In the Shang and Zhou Dynasties of China, a piece of bronzeware was an important symbol of the ancient civilization.

6. The Royal Seal Hall of the Dynasties

The Royal Seal Hall of the Dynasties is the first art hall which specializes in displaying royal seal carvings in China. It exhibits over 500 royal seal carvings in the area of 380 ㎡. The exhibits follow the developmental history of seal art from the Western Zhou Dynasty to the late Qing Dynasty. All of them are representative and artistic quality examples selected from over 10,000 seals. 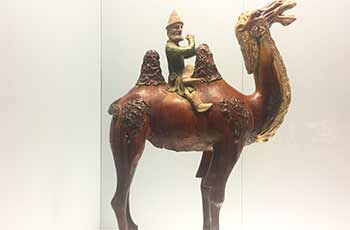 the exihibit of the Sculpture Hall

It displays over 120 exhibits in the area of 640 ㎡. The exhibition hall adopts the display form of exposure with the 3 basic colors of gold, red and black. The walls have the shape of lotus petals usually used in Buddhist art and the closets are niches in the Cave Temple. In addition to some wood carvings and pottery sculptures, the exhibits mainly include stone-carved statues, covering sculptures of the Northern Wei, Northern Qi, Northern Zhou, Sui and Tang Dynasties, stone carvings of the Southern Dynasties and golden copper statues of Buddha.

The hall displays altogether over 120 quality paintings of various types from the Tang Dynasty up until modern times in its area of 1,200 ㎡. Painting reflects China’s profound tradition and unique national style. It is a kind of formative art with the writing brush, ink and silk paper as its main instruments and dot-line structure as the major means of expression. For effective protection and audience appreciation, the exhibition hall employs inductive spotlights which can automatically adjust illumination.

China has long been known as “the country of jade” with a history of over 7,000 years in manufacturing jade ware. In ancient society, jade, as the symbol of wealth and power, was used as not only decoration, but also a magical object for governors to offer sacrifices to Heaven and Earth and communicate with the gods.