Imitating the architectural style from the Song Dynasty, the Jade Buddha Temple covers an area of 11.6 mu giving it a floor area of 8,856 square meters. Tianwang Hall, Great Buddha’s Hall and the Jade Buddha Building lie along the central axis of the temple, with Guanyin Hall, Tongfo Hall, Wofo Hall, Huan’en Hall, Chan Hall and Zhai Hall lying on the east and west sides. There are also halls where you can appreciate cultural relics and buy Buddhist items and statues, and a vegetarian restaurant.

Highlights of the Jade Buddha Temple 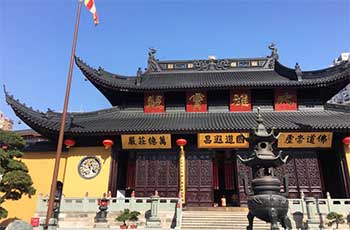 As the main building in Jade Buddha Temple, the Great Buddha’s Hall is a two-story palace of the Song Dynasty architectural style, about 30 meters in length and about 25 meters in width. In the middle of the hall stands the statue of Sakyamuni with the statues of Amitabha and Bhaisajyaguru to each side of it; all of the three statues are sitting on lotus seats. In each side of the hall are gods which are responsible for the protection of Buddha dharma. Behind the three great statues of Buddha is a large painted sculpture of Guanyin.

On the ceiling of the Jade Buddha Building there are 500 gold-plated statues of Buddha. The charge is RMB 10 to enter the building for a visit.

Another statue, now kept in Wofo Hall, is a 96 centimeter tall statue of Sakyamuni which was carved according to the look of Sakyamuni when he passed away at 80 years old. The statue featuring Sakyamuni lying on his side with his right hand supporting his head looks very peaceful. On the opposite of the statue there is a new 4 meter tall statue of Buddha made of jade which was donated by a Singaporean Buddhist. 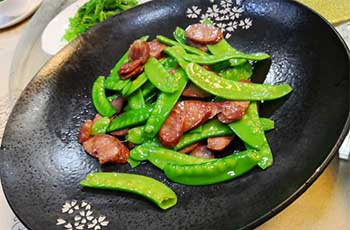