As the first Disneyland Theme Resort in mainland China, Shanghai Disneyland formally opened on June 16, 2016 in Chuansha New Town, Pudong New Area, Shanghai City. Disneyland brings pleasure and happiness to people of all ages. Visitors can realize their dreams with the novelty, fantasy and adventure everywhere in the Resort.

There are seven Theme Parks in the Resort: Mickey Avenue, Gardens of Imagination, Adventure Isle, Treasure Cove, Tomorrow Land, Dream World and Toy Story Land. There are two theme hotels: Shanghai Disneyland Hotel and Toy Story Hotel. There is one subway station: Disney Station; And, of course, there are many entertainment projects first launched globally.

Disney has an official APP to find your location, enquire about the map, the anticipated waiting times, and the time arrangement of shows, and to search for the catering and restroom facilities.

You can get a Fast Pass by scanning the QR code on the entrance ticket at the Tourist Service Center. But the Fast Pass of a project can only be got at its corresponding Theme Park. For example, you can only get the Fast Pass of TRON Lightcycle Power Run at the Tourist Service Center of Tomorrow Land. A Fast Pass indicates the time when you can get another one. You can only get another Fast Pass after 2 hours. In general, the Fast Passes of all the projects may be handed out at nearly 1 p.m. So if you enter the Resort at 9 a.m. (you’d better to get a Fast Pass first), you can get the first Fast Pass at once, the second one at 11 a.m. and the third one at 1 p.m.

Due to the large number of visitors, the queuing time is at least 1.5 hours on average, with that of popular projects reaching 3-4 hours and that of some small projects reaching over 1 hour. So you’d better prepare for it. You’d better get a Fast Pass as soon as possible. 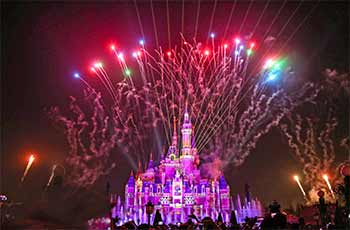 There are two float parades at 13:00 and 16:30 respectively. It is recommended to queue up for some popular projects instead of watching the parade at 13:00. There may be fewer people in the queue at that time, so you could save a lot of time. And at 16:30, you can watch the float parade with lots of classic cartoon characters.

There are many shows and the schedules can be enquired about with the official APP. Among them, the Frozen Singing Pageant is the most recommended. Some travelers have even seen it twice. The Disney performers work very hard and very well with a strong dynamic.

About the Fireworks Laser Show at Night (Luminous Phantom Show)

You’d better ask the staff about the show. If there is a Luminous Phantom Show, you really should not miss it.