Located on the southern coast of Qingdao's central city, the bridge is a 440-meter-long promenade that extends from the land into the sea. It is one of the seaside scenic spots of Qingdao. It was on the first batch of the national scenic spots by the State Council in 1982 and on first batch of national AAAA-level tourist attractions. The Trestle was built in the Qing Dynasty (1892) and has a history of over 100 years. It is a symbol of Qingdao. It is the earliest military artificial pier in Qingdao, and is now a landmark of Qingdao and a famous scenic spot.

Highlights of the bridge

The Zhan Bridge, also known as the Trestle, is more of a pier, as it reaches out into the sea towards Small Qingdao Island. The north end is connected with the commercial street Zhongshan Road in a straight line. The Trestle bridge ends with a triangular seawall where there is a national-style octagonal pavilion called Huilan Pavilion. Tourists can enjoy the surprising scene referred to as ‘Wave on Huilan Pavilion’, which is of one of the top ten scenic spots in Qingdao. The Trestle Park is on the north side of the coast, where there are lush forests and flowers. Sitting on the stone chairs, visitors can relax and enjoy the view of the sea and sky. 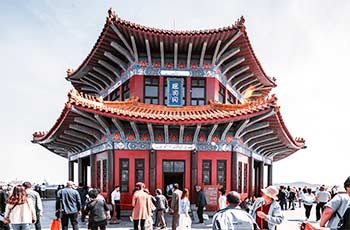 Huilan Pavilion is located on the waterfront of the Shinan District of Qingdao City, facing Xiao Qingdao Island. Its north end is connected with Zhongshan Road directly. It is regarded as an important symbol of Qingdao. The pavilion is a two-story octagonal pavilion. The pavilion is covered by colored glazed tiles, is supported by 24 red-painted pillars, and has a spiral staircase. Glass windows are installed on the upper floor, and through each one of which, you can appreciate various picturesque views. Looking through the window, you can see the beautiful Qingdao Bay and the surrounding attractions as well as famous buildings.

At present, Zhongshan Road is also one of the most prosperous places in the old city. The Trestle (bridge) happens to serve the transition between the sea and the street. It connects the sea and the land closely. Opened in September 1998, the tallest building on Zhongshan Road is the “Parkson Plaza”,. It was one of the first 18 joint venture retail enterprises approved by the State Council and was known as the top Commercial architecture in Shandong province. 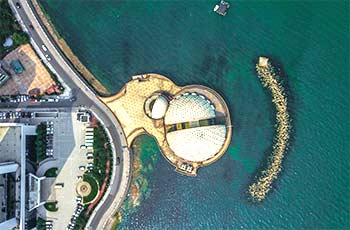 Palace Over Sea from bied's view

The Sea Palace is a place that integrates sightseeing, entertainment, performance and catering. The whole building is composed of several quarters of a circle. It has 6 floors, including a basement and a top floor. The 5th floor is supported by 108 pillars and has a construction area of 11,000 square meters. It is listed as a first-class restaurant in Qingdao with a first-class environment and five-star service.

The beach on the west side of the Trestle is the Sixth Bathing Beach. It is the smallest one in the urban bathing area. It is adjacent to the bustling Zhongshan Road and has a beautiful surrounding environment, which can accommodate thousands of tourists. The sand is fine, which is especially suitable for beach play. The Sixth Bathing Beach is not far from Xiao Qingdao. When night falls, the navigation lights on the Qindao Island and the rolling waves of the baths form an intoxicating night scene.