The Chinese character of Lao has been changed a couple of times. It is on the coast of the Yellow Sea and is renowned for its glorious peaks, water and clouds. From the top, you can see the waves of the Yellow River and the pearl-like islands. The mountainous area mainly includes the scenic spots of Jufeng (grand peaks), Liuqing (clear brooks), Taiqing (advance Taoist status), Yangkou (a gap between mountains), Beijiushui (North Jiushui Resort ) and Hualou (a pavilion). The old saying goes: "Even one of the top five mountains, Tai Mountain, despite its height, does not enjoy the features of Laoshan at East China Sea.”

Located in the eastern part of Qingdao, Laoshan is adjacent to the Yellow Sea on its east and south sides. It has the reputation of being “the No.1 mountain on the sea” and its highest peak is 1,133 meters above sea level. Majestic, spectacular, peculiar and beautiful, Laoshan become a famous Taoist mountain. The Taoist temple on the top offers a great view of the natural scenes such as the sunrise and sunset. 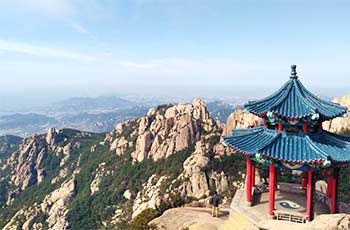 Jufeng is the main peak of Laoshan Mountain, commonly known as the "dome". The peak, with an elevation of 1127.3 meters, sits among all the other peaks in the middle part of the mountain. Scene of Jufeng, the Great Sunrise, and the Burning Shrine are all nice scenes that can be seen from there. Typically, ‘Sunshine on Jufeng’ is one of the twelve best scenes. During the Qianlong Emperor period of the Qing Dynasty, the local governor wrote a poem about this: "Standing on the highest peak, one can admire the overseas world. Perchance, it is the wonderland of so called Elysium. The high sea is hidden behind numerous mountains. I believe that they are more exceptional than Mountain Tai. ”

It is a great pleasure to watch the moon rise over the sea from Taiqing Palace. When it is dark, the moon gradually rises above the horizontal and sheds all its rays upon the sea and the mountain. The costal breeze is running in the bamboo, the waves are kissing the shore gently. That is fantastic. They call it “Taiqing Shuiyue”. Lin Shaoyan, a literato in the Qing Dynasty, wrote a poem about this: "I feel that the fairyland ascends on Taiqing tonight. The sky is clear and the moon is remote. You can fall asleep listening to the tides. It can be cold in the dawn as the first leaf begins to fall for the season. I meditate alone and suddenly hear the chime.” 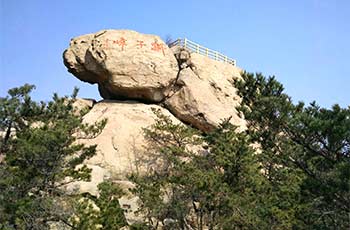 In the northeast of Taiping Palace, a couple of huge stones are packed. When they are covered by thick clouds, they look like lions. When the wind blows, the quickly moving clouds make the stones appear even more fantastic. But what people favor most is the sunrise time. After that, the morning mist will bring the above Lion Hill scene, which is also one of the top twelve views in Laoshan Mountain. In the Ming Dynasty, a literati Huang Zongchen had the poem ‘One Night on The Lion Peak’, "There is a cup-shaped pit in a lion stone, and the moon is high above the mountain and the sea beyond. The sound heard in the mountains in the midnight is really the mixture of the wind and the waves.”