Golden Sand Beach and Island is located on the shore of the Yellow Sea. It is one of the beaches with the finest sand and the largest area in China. It is known as “one of the top beaches in Asia”. On the east side of the Beach is a trumpet-shaped mountain. The strong sea breeze blowing from the Yellow Sea raises the waves onto the sand, making the beach extraordinarily spectacular. Eating delicious seafood on the beach is highly recommended.

Golden Sand Beach is located on the southeast coast of the Huangdao Development Zone and is named after the sand's golden color. The sand here is probably the best in Qingdao, and it is finer than those sea baths in the city. Golden Beach features a vast coastline, which enables tourists to be far from the hustle and bustle. The Golden Beach Cultural & Tourism Festival is held every summer. The fine sand is the most attractive reason for Golden Beach. One can walk or run barefoot and enjoy the softness under your feet. You can also bring kids here to make sand sculptures, fly kites, jump in the waves, or swim. Perhaps you can board a speedboat, step on a water bike, or play beach volleyball. There is also amusement equipment such as carousels, pirate ships, and an air cushion on all the children's playgrounds. 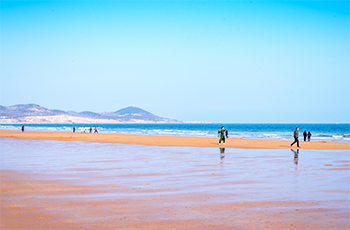 Golden Beach is the most beautiful beach and with the best waves in Qingdao. The east side of Golden Beach is open, so that the strong sea breeze blowing from the Yellow Sea can always reach the beach, making the narrow beach look extraordinarily spectacular. Golden beach stretches to the horizon and the high sea is far away. “Where there is the surfing water, there is the work and songs for this.” In the poems of "On Golden Beach", a poet describes the beautiful and moving picture of the Golden Beach and the beautiful eagle.

The Festival is usually held every summer (usually from mid-July to mid-August). For each opening ceremony, famous singers and song and dance troupes from home and aboard are invited. There will be wonderful performances and a singing contest, so that are there are more tourists here in the summer and Golden Week. If you hate spending time in the crowd, you can join June or September. There are less flashy things at that time. 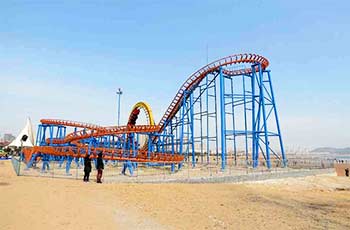 The amusement items on the beach

The Golden Sand Beach has a pleasant view, and there are all kinds of travel functions such as beachside leisure, entertainment, catering, sports, consulting services, holiday travel and so on. In the beautiful scenery, tourists can make sand sculptures, fly kites, motor on the beach shoreline on battery cars, or take a beach plane, take a speedboat, ride a water bike, start up a hovercraft, or ride a Ferris wheel. Amusement items such as a water walking ball, carousel rides and pirate ships are highly welcomed.