As a world-class beer museum, Tsingtao Beer Museum combines the development of the centurial history of Tsingtao beer brewing, modern beer production, and modern beer brewing into a multi-functional tourist attraction showcasing cultural history, production technology and beer entertainment. Tourists can learn the brand legend and the mysterious beer craftsmanship, taste the beer in the factory, learn its history, buy goods and explore.

Highlights of the Museum

The museum is divided into two exhibition areas. The first one is about the history and culture of the beer. The second one mainly shows the specific operation, assembly line and workshop of the brewery. You can see very clearly the flow of beer up until the packaging. It is very interesting. Visitors will get a bag of beer beans and two glasses of beer, one being the essence and the other being the draft beer. 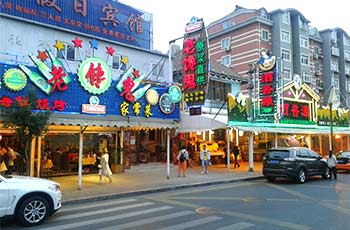 Close to the entrance of the Museum is the famous Dengzhou Beer Street, where there are lots of seafood stalls and bars themed with Tsingtao Beer. On the west side of Beer Street, there is an indoor shopping and dining street named Tianmucheng; while there is Taitung Pedestrian Street in the east, where there are many shopping eateries including seafood. Foodies can go to Dengzhou Road and enjoy seafood and beer, well-lit by the backdrop of neon lights. Beer offered there is produced on the same day. Authentic Qingdao people share the habit of taking beer home in plastic bags. There is also the Qingdao Wine Museum on the south side of the museum.

In the historical and cultural exhibition, visitors can learn that the Tsingtao Brewery was first established by the Germans, then taken over by Japan and finally returned to the Chinese. The display hall includes the following contents: the trade mark when the factory returned to China in 1948, a Tsingtao beer advertisement shot in 1947 being played, which is the earliest AD made in films in China. 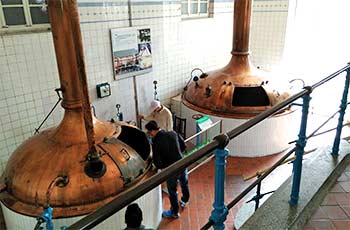 The old equipment of brewing beer

The whole brewing process is introduced in this area, including the materials and the old equipment. In a nutshell, raw materials such as malt are mashed at a high temperature into wort, which is then fermented, filtered, and finally packaged. Visitors can have a glass of main raw materials, various raw malts, auxiliary raw materials, shops, fermenters, large wooden barrels, and the beer canning line. The saccharification pot, which was hand-made with red copper as well as one of the earliest version of Siemens motor are the legacy from the early time. The motor was manufactured in 1896 and can operate well with a power supply.