An Important Town on the Ancient Tea Horse Road

As one of the earliest habitations of Naxi ancestors on the plains of Lijiang, Shuhe Ancient Town is the living specimen of Naxi people’s transition from an agricultural civilization to a commercial one. Being the most well-preserved major town on the Ancient Tea Horse Road, it is also a paradigm of the opening up and towns developed as the result of the activities of horse caravans. Playing an important role in Lijiang Old Town, a World Cultural Heritage site, Shuhe Ancient Town was selected as one of the most charming towns in China by CCTV in 2005. 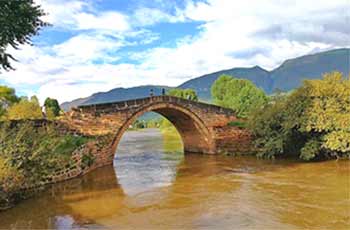 Built in the year of Wanli of the Ming Dynasty, Qinglong Bridge has a history of more than 400 years. To the west of it lies Jubao Mountain, which faces the central axis of Qionglong Bridge. Designed by Tusi, chief of the Mu clan, Qinglong bridge is the landmark of Tusi in its heyday. Piled up by stones, Qinglong Bridge is 25 meters in length, 4.5 meters in width and 4 meters in height. Considered as the best of the ancient bridges in Lijiang, Qinglong Bridge is of great importance in the economic and cultural development of Lijiang throughout the history.

Only 30 meters long and 30 meters wide, and surrounded by water, Sifang Street in Shuhe Ancient Town has four lanes stretching in all directions. As one of the oldest bazaars in Lijiang, Sifang Street is full of hustle and bustle every day. 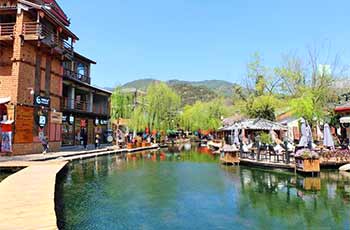 Lying to the east of Longquan Mountain and west of Qinglong River, Jiudinglong Pool is formed by two small semi-circular pools connected by a pavilion which is the best position from which to appreciate the beauty of Jiudinglong Pool. Coming from the stone cracks at the foothill of Longquan Mountain, the water in the pool, though not deep, is clear in summer and abundant in winter. There are many fish in the limpid pool. Legend has it that once a man wanted to catch the fish in the pool when there suddenly came thunder and lightning to prevent him. Since then, nobody has dared to fish there. Therefore, the fish there are considered miraculous by the locals.

Beside the pool stands an incomplete tablet, the year of which cannot be figured out. If knocked with a stone, the tablet will produce a clear sound, but in order to protect the scenic spot, visitors are advised not to do this.

Situated to the north west of Shuhe Ancient Town, and right beside Jiudinglong Pool, Sansheng Palace was built in the Qing Dynasty. The temple is a quadrangle with three sides of the upstairs built with corridors from where you can enjoy the view into the far distance. Each palace of the temple has a statue of different gods in it, with a statue of Avalokitesvara (Goddess of Mercy) in the west palace and the statue of the Dragon King in the northern building. Among all the statues, the one in the Southern building is different from others in that it is not a statue of a god, but of a mortal, Sunbin, who is said to have invented leather boots and considered the father of leather makers. As Shuhe is viewed as the town of leather makers, the statue of Sunbin is therefore placed in the temple.

The traditional Naxi festival, the Bangbang Festival, is held on the fifth day of the first lunar month. The Bangbang Festival is in fact a fair where people can buy and sell farm tools for the preparation of the coming spring ploughing. Farmers and merchants from the neighboring counties, or as far away as Dali, Baoshan, and Tibet, all come to the fair to sell their specialties, and buy things they need. Farm tools, different kinds of saplings of fruit trees, flowers and bonsai, and even toys and daily household supplies can be found at the fair.

The Torch festival spans three days from the 25th day to the 27th day of the sixth lunar month. During this midsummer festival, people hold bullfight performances during the daytime, and put on a parade while holding torches at night. 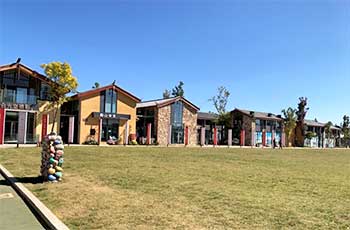 Located next to Shuhe Ancient Town, COART Village is an art district developed by Li Yapeng, a famous actor in China. Themed on COART, the village is equipped with an art center, art fair, cinema, studios of artists, art shops and handicraft shops.

The ambience of art here has attracted many organizations to hold activities in the village. With various activities and the regular art festivals themed on COART, there are a variety of wonderful performances and exhibitions to enjoy.

Moreover, with the snow mountain at its back and surrounded by streets tinged with local colors, the village looks fantastic. Providing accommodation including hotels and inns, COART village adds a new spot on the list of tourist destinations in Lijiang.