Also known as Jade Dragon Park, Black Dragon Pool Park was built in the second year of the reign of Emperor Qianlong (1737) at the foot of Elephant Mountain in the north of Lijiang Old Town. It is the best spot to capture the most beautiful pictures of Jade Dragon Snow Mountain, appreciate ancient architecture in the class of national treasures, and enjoy a bird’s eye view of the whole of Lijiang Old Town from above Elephant Mountain. 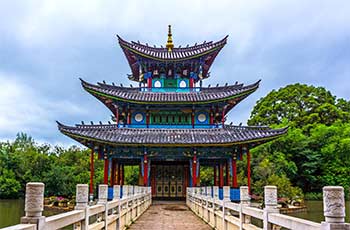 A number of interesting architectural examples in the park are worth visiting. Longshen Temple includes a theatre pavilion, and Deyue Tower is the major piece of architecture in the park. Facing west, Longshen Temple is a quadrangle containing five wells, an arched gateway, two wing rooms and a main hall. On top of the arched gateway, a four-character plaque reads Tianguang Yunying in Chinese, which describes beautiful scenery with the sky and clouds reflecting on the water.

Due to historical causes, many important cultural relics around Lijiang were removed and brought here. Four stone lions which originally belonged to Zhongyi Gate of the Mu’s Mansion and Wenming Gate which originally belonged to Confucius Temple now make up the gate of Black Dragon Pool Park. Five-Phoenix Tower, also known as Fayun Pavilion, which was originally built in Fuguo Temple of Zhi Mountain, was removed to Black Dragon Pool Park in 1979. There are more of such cases, quite a number of which involve cultural relics of national level.

With the companion of ancient architecture, Black Dragon Pool and the snow mountain, it’s a great place to take a pleasurable walk, to relax, and to do some morning exercises. 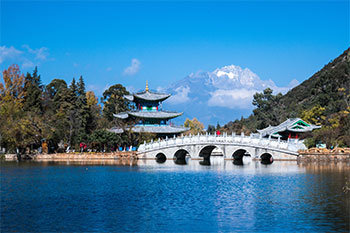 The beautiful scenery of the Jade Dragon Snow Mountain