Authentic Ancient Village, Home to Precious Murals with a History of 300 Years

Baisha Village is part of Lijiang Old Town which is listed as a World Cultural Heritage site. As an old village about 10 kilometers to the north of Lijiang Old Town, it is the earliest settlement in the Lijiang Dam area for the Naxi people and the cradle of the ancient Mu clan in Lijiang. Today in Baisha Village you can still get a glimpse into the simple and primitive folk customs of the Naxi People and the traditional ways of working and the lifestyle of the Naxi people through thousands of years. This small village has attracted many foreign tourists. The “Baisha Murals” here made in the Ming and Qing Dynasty are of the greatest value. 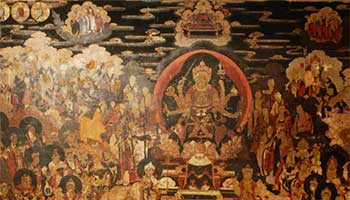 In Baisha Ancient Town there remain 55 pieces of Baisha Murals separately preserved in Daobaoji Palace, Liuli Temple, Dading Pavilion, and Dajue Palace. The murals feature the fluent lines and bright colors of the painting style of Tibetan Buddhism, and are hailed as the gem of the mural art. During the Ming Dynasty, Tusi, chief of the Mu clan, was in his heyday when the stable political situation allowed a wave of palace building, leading to the establishment of a batch of large-scale building complexes.

The existing murals of the Ming Dynasty kept in Baisha’s Liuli Temple, Dabaoji Palace and Dading Pavilion are exceedingly precious cultural relics. Among them, the mural of Dabaoji Palace is of the largest scale. Painted during the reign of Wanli Emperor in the Ming Dynasty, it consists of 12 pieces of murals and contains 167 portraits in total. With a religious theme, the mural shows the portraits of Buddha, but also Taoism and Lamaism in just the one piece. Such a way to bring different religions together is an uncommon sight, making the mural of Dabaoji Palace stand out from others.

200 meters along the western alley of Sifang Square stands the Great Stone Bridge of Baisha Village. It is the oldest big stone bridge in Lijiang. It is not only the key road connecting the Baisha Village and Yanjiao Village, but also one of the necessary links for the caravans traveling along the Ancient Tea Horse Road.

Other Attractions Around the Place: Yuhu Village 玉湖村 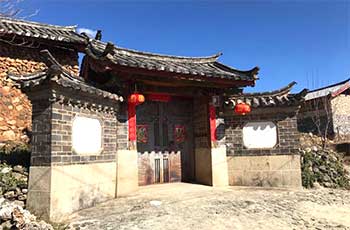 The houses of villagers in Yuhu Village

Yuhu Village, also known as Xuesong Village, is a quiet old village at the foot of the Jade Dragon Snow Mountain. It is well situated with beautiful landscape all around. The houses of the villagers are built of stones, demonstrating an ancient and simple atmosphere. It is a good place to take photos and also a perfect choice for tourists who like a quiet life and enjoy the tranquility and beauty.

Xuesong Village is not as famous as the Dayan Ancient City and Shuhe Ancient Town, although, as one of the sources of Tusi, Chief of Mu Clan, it has also gained its reputation in the world. In 1922, Joseph Rock, an Austrian American explorer, came to Lijiang and lived here for 27 years. He left a lot of pictures and documents about the place. Now his former residence is also in the village and tourists can buy ticket for a visit.

There is a Villafound Jade in Xuesong Village. It was designed by Nie Jianping, a famous architect. This stone architecture is blends perfectly with the architectural style of the village, adding to the stunning scenery. People can stay here if they want to learn more about the customs of Xuesong Village. The hotel is high-end and high-priced. Apart from this, in the village there are many other inns which are well-equipped with facilities. You can make a choice according to your own needs.