The center of Lhasa

It is often said that “Jokhang Temple was built before Lhasa”. As the “Eye of Tibet”, the Jokhang Temple has a supreme status in the Tibetan religious culture and has been the center of all major Buddhist activities. Every day a lot of people come here for the Turning Scripture.

The construction origin of Jokhang Temple

Jokhang Temple was built in the mid seventh century AD by Tibetan king Srongtsen Gampo as a resting place for the life-sized statue of 8-year-old Shakya Muni brought by Princess Bhrukuti of Nepal from her hometown Katmandu. In 1409 AD, the founder of the Gelug Sect, Tsongkhapa held the Great Prayer Festival in the Jokhang Temple in order to carry forward the Buddha Dharma, thus laying its important position in the history of Tibetan Buddhism. In the eighth century AD, Princess Wencheng brought the life-sized statue of 12-year-old Shakya Muni when she came to Tibet, and it was placed in the Jokhang Temple for worship and became the hallmark treasure of the Jokhang Temple. 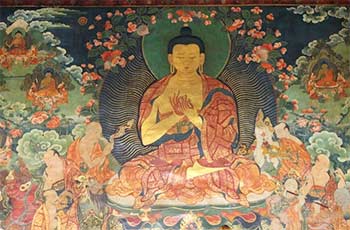 There are nearly 1000 meters of Tibetan murals of Princess Wencheng Into Tibet and Jokhang Temple Construction and two pieces of Dharma God Thangka with Ming embroidery. They are rare art treasures.

There is a courtyard right inside the main entrance to the Jokhang Temple. On the eastern side are several rows of butter lamps. As followers refill the butter every day, they never go out. Past the Butter Lamps is the front gate of Jokhang Temple main shrine. On the left of the gate is the Guru Rinpoche, founder of the Red Sect of Lamaism; on the right is the Jampa Buddha, or Maitreya Buddha, also called: Future Buddha. On the right side of the wall is the mural about the construction story of the Jokhang Temple. 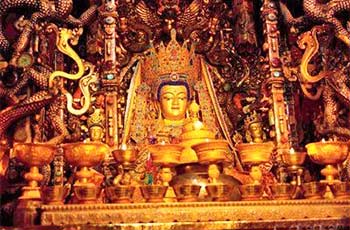 The next thing is the Buddhist shrine for worshiping Tsongkhapa, the Yellow Sect founder and his eight disciples in clockwise order. Continuing to move forward on the right-hand side, after the Yaksha shrine and Dragon shrine on the two sides and hundreds of butter lamps, you can see the notable “Jokhang” shine. It is both the main body and the essence of the Jokhang Temple. At the center of Jokhang Palace is the grand scripture hall, which is where the Lama recites scriptures and does meditation. There are many small scripture halls in the surrounding area. The last thing not to miss is the middlemost Shakya Muni Temple for worshiping the 12-year-old life-sized statue of Shakya Muni brought by Princess Wencheng. Here is the core of the Jokhang Temple, the crux of any visit to this place, and a sacred place for pilgrims.

There are stairs to the second and third floors beside the courtyard. On the second floor, there is the King Temple for worshiping the Tibetan King Srongtsen Gampo, Princess Wencheng and Bhrikuti and also the Ben Dan Ram Dharma Temple for worshiping Palden Lhamo. Standing on the spacious terrace on the second floor, you can look out over the Potala Palace. It is a perfect place to take photos. The Golden Top on the third floor is also a focal point for watching everything in the Jokhang Temple. However, most of the time the third floor is not open to the public.