The Museum is located in Guandu District, Kunming City, next to Guandu Ancient Town. As the largest comprehensive museum in Yunnan Province, it provides relics showing the chronicles of Yunnan from ancient to modern times. It is probably the best place to learn about Yunnan's history and culture. The museum's exterior is red and has a stone-like decoration.

Highlights of the Museum

There are seven permanent exhibitions in the museum, namely, the Preface Hall, the Ancient Yunnan, the Light of Civilization, the South China Kingdom, the Wonderland of Buddhism, the New Frontier, and the Centennial History of Yunnan and China. The tour will take you back in time to learn about Yunnan from the very beginning. And every one of its objects is rich with countless stories. As Yunnan is located in the frontier of the country and is home to many ethnic groups, the relics provided here are quite characteristic when compared with cultural relics showcased in other "non-frontier" provinces, or those in the central part of China (Zhongyuan, central plains).

The Preface Hall provides a highly concentrated version of the contents of the landscape, natural property, ethnic customs and the human history of Yunnan. The audiences will acquire a colorful "Yunnan Impression" in a short time. When people enter the hall, they will be welcomed to the front exhibition and those on both sides. After that, visitors have to look up and turn around. This is the right way to visit the Preface Hall. The very essences of Yunnan's history, geography, humanities and other elements are all delicately interpreted.

Wonderland of Buddhism – Yunnan in the Tang and Song Dynasties 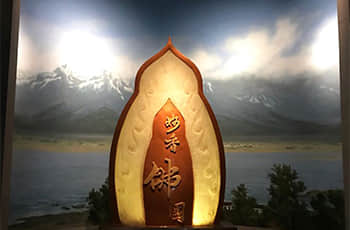 The exhibition is divided into the following: the rise of Meng Clan, the trace of Nanzhao Kingdom, the ups and downs of Dali Kingdom, and the world of Buddhism. The 600 hundred years of Yunnan history is introduced chronologically. The background, founding, events and chronicles of Nanzhao are listed. Then comes the brief history of Dali Kingdom, as well as the society, architecture and costumes. This part ends with the perception of The Five Buddhas (which may vary as per local understanding of the religion).

Centennial History of Yunnan and China – Yunnan in Modern Times

The chronicles of the modern time is shown in 6 themes: Troubled Yunnan, War in the South, A Single Spark, Long March at Jinsha River, Anti-Invasion in Yunnan, and the Dawn of a Country. There are three major scenes showcased, that is, Ancient Town in the Dark, Dusk Battlefield, and Dawn on a Country. Lighting and materials help to tell the stories of that desperate moment.

The New Frontier – Yunnan in the Yuan, Ming and Qing Dynasties

This part includes the immigration of Han people to the south, the rise of Han families, Huo Chengyu's Tomb, and the fall of Han families. The iconic history shows the close connection between Yunnan in the southwestern border of the motherland and the dominant dynasties in China. The audience can feel the strong bond between ancient Yunnan and the central land of China as they have their knowledge about Yunnan enhanced. 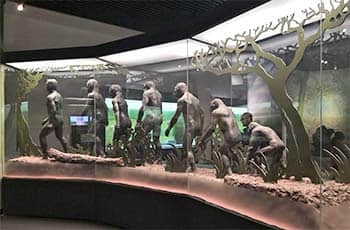 This hall informs the general evolution of humans from the Cambrian explosion, the world of dinosaurs, the forming of homo sapiens and the Neolithic Age. Fossils of ancient creatures and geology that have been found in Yunnan and shocked the world are all displayed. The knowledge of the genesis and the pattern of ethnic diversity are also informed by sand tales, relics, models, video materials, scene restoration, high-tech electronic equipment and other cutting-edge technology, and are used to present Yunnan's unique value for geology, paleontology, human development and diversified ethnic groups.

The Light of Civilization – Yunnan in the Bronze Age

This hall provides three parts of the early Yunnan history, that is, the beginning of the Yunnan Bronze Age, the overview of the Yunnan Bronze Age, the leader of the Southwestern – Dian State, Yi Zhou in Han, and the Three Kingdoms, which are all visualized through vivid historical events and the visual display of beautiful cultural relics. Standing in front of the past glory, people are reminded of the close relationship between the southwest and the central part of the country that lasted through all dynasties.

The headwear is 15 cm in diameter and weighs 260 grams. This round piece is engraved with sun patterns in the middle. Regular geometric patterns fill the rest of the space. The decoration covers the whole plate and the sides are equipped with two rounds of silver pieces. This is one of the Yao people, Dingban Yao People's head ornaments for females.

The Golden Mail belongs to the Western Han Dynasty. At 18.8 cm high, the protective weapon is cylindrical and wider on the top and narrow on the other end. While there is no pattern on the body, the cylinder has openings on the sides and there are rectangular cut outs along both sides. The craftsmanship is considered very fine. 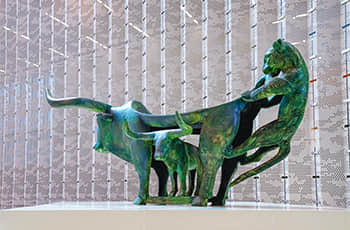 The Copper Case was unearthed in No. 24 tomb, Lijiashan, Jiangchuan, Yunnan Province in 1972. It is 43 cm high, 76 cm long and 36 cm wide, and belongs to the Warring States Period. The main body of the ware is a big standing ox. Its back naturally touches the case while a relatively smaller tiger is biting the tail of the ox. Below the belly, a calf is engraved. The bronze ware is made by modelling, as the big cow and the little tiger are molded at one time, the calf is cast and welded in a second time. The Niuhu Copper Case is a ritual ware of the ancient Yi people. It is a bizarre combination of the cattle and tiger.

This picture has both a close-up depiction of streams, rocks, and a full scale of branches, pavilions and springs. The signature of the painting on the low corner is "Guoxi to Your Majesty". Guo Xi, whose courtesy name was Chunfu, was born in Wen County in Henan Province (currently Meng County). His birth and death is not recorded but he was good at landscape paintings. He learned painting skills from a master in the early Song Dynasty, Li Cheng. And his skills only got better and matured as he aged. He was renowned for his deep understanding of painting theory. He initiated the painting method known as the Sanyuan Method, that is, the painting should provide extensive space indication in all three dimensions, the width, length and depth.

This painting was a relic of the Qing Dynasty. It is made up of six paintings which are 156 cm in length and 45.5 cm in width. They reflect the society, production, customs and scenarios of ancient Yunnan ethnic minorities. The subject matter covers many aspects of social life such as picking betel nuts, elephant riding, hunting, bathing, and copying Buddhist sutras. It depicts life of that time in a very poetic way. The details of the pictures are very vivid, offering a window to the ancient Yunnan minority's life and images then. 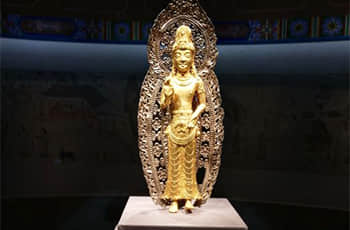 In 1978, this saint statue was excavated from the main tower – Qianxun Tower among the three saint towers in Chongsheng Temple in Yunnan. It belongs to the period of Dali. The standing statue has a high up hair do and wears a Buddha crown. The eyes are half open and the expression is really tranquil. The shape is symmetrical. This delicate piece is a superior work of the ancient religious world. It is a renown relic at home and abroad. There are 13 metal statues of Acarya Avalokitesvara in the world, of which 10 are abroad and 3 are in the Yunnan Provincial Museum. This is the only statue that is decorated with gold. The other 12 are decorated with bronze.

This belongs to the cultural relics from Dali Kingdom. At 23 cm wide it is one of the three treasures of Buddhism, because the Buddhist scriptures are the carrier of the Buddha's words, deeds and thoughts. It is also an important means of Buddhism communication. This copying sutra was made in the tenth year of Tian Kai, Dali Kingdom (AD 1214), and the Sanskrit can be seen in scriptures, which is the main feature of Buddhist scriptures of Vajrayana in Yunnan.

The seal dates back to 1950, the second year of the foundation of the People's Republic of China. It is 18.8 cm high, and on the back the seal is engraved with the words "Yunnan Provincial People's Government Seal", "December 1949", and "No. Seventy Eight" in cursive script. The main content is made in Song Type. The characters are neatly arranged with clear and grave side boundaries. The delicate characters look very serious and powerful indeed. This intact seal that witnessed history is of high culture and archive value.