The natural wonder in Kunming

The Stone Forest is located in Shi Lin (literally ‘stone forest’) Yi Autonomous County of Kunming City, Yunnan Province. The area, located 78 kilometers out of Kunming, is a karst landform scenic area located in the subtropical plateau with the reputation of the “Stone Forest Museum”. Its titles include: the first batch of China's national key scenic spots, China National Geo Park, and World Geopark. The attraction is one of the four major tourist destinations, along with the Forbidden City in Beijing, Terracotta Warriors and Horses in Xi'an, and the Guilin Landscape.

Highlights of The Store Forest

Shi Lin Scenic Area, known as “a top wonder of China”, is also a must-see attraction in Kunming. The Stone forest is a typical karst landform, with stone peaks, stone buds, falling water caves, and underground rivers all over the place. The soaring peaks enable rich visualization of images such as swords, towers, and mushrooms, all of which are very strange and beautiful. The majestic shapes of nature are just marvelous.

The big stone forest is composed of dense stone peaks filling a basin terrain. The stone forest stands upright and has smooth lines. They all show a hint of blue-gray. The largest independent column is over 40 meters high, and on the most famous column known as the "Shilin Shengjing" (the magnificent view of Shi Lin) can be found Long Yun's inscription, “Shi Lin”. Long Yun is a hero who fought against the Japanese invasion troops, was General of the 1st Army Group in KMT time, and declared his revolt against Chiang Kai-shek's rule, an action which saved the people in Yunnan from further havoc of war. He is of Yi Ethnic Group and is widely known as an artist of calligraphy.
Wangfeng (Peak Viewing) Pavilion is the best spot to admire the sea of stones. Be warned that you can get lost without a local guide in the labyrinth like stone forest. 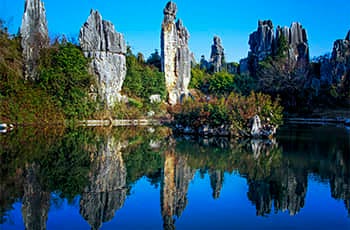 Mini Shi Lin is closely connected with the grand stone forest and has its own pattern. The terrain here is flat and the grass is dense. Strange peaks and rocks surround the area.
The wide, thick stone walls screen the Mini Shi Lin, dividing it into several plots. The most famous spot in the small stone forest is called "Ashima" – there is a love story behind the name, please refer to Wikipedia if you are interested. When night falls, the forest of stones is well lit.

Close to the Bimu Pond in Lizi Yuan Jing is this 15-meter high peak. It reminds people of a giant Reishi mushroom. The Reishi is an almost miraculous herb mentioned in myths or fairy stories where it saves a life or extends the life to infinity. Standing on the top of the ‘mushroom’ at sunset is a pleasant experience.

Sentry Mountain is located to the east of Grand Shi Lin and south of the Mini Shi Lin. The mountain got its name as an uprising troop of Yi People led by Zhao Fa against the rule of late Qing Dynasty once set sentries here. The top of the mountain is 1796.7m above the sea level, nearly 50 meters above the Wangshi Pavilion in Grand Shi Lin, marking it as the top place in the Stone Forest. There are many columnar stone forests in the area, and they are each a unique landscape such as “Sentry with Five Stone Gates” and “Pine Waves Around Sentry”. Fossils of giant gastropods, coral and other marine creatures are found here, reminding people of the sea-bottom world of 270 million years ago.

This attraction is close to the ring road of the stone forest. Over the barren hill, with a radius of 5 km, are scattered bizarre, eerie columns which are barely covered by tall trees. About 300 meters southeast to the ring road, there is also an ancient cliff painting depicting images of barbarian people, beasts, objects, stars and the moon. Archeologist believe that the original religious content is related to the Zuojiang Cliff Painting (which displays works done between the Warring States Period, 475–221 BC, and the Eastern Han Dynasty, 220 AD, in Guangxi Province, China.)

1. Visiting Shi Lin will involve quite a lot of walking. Hiking boots or sneakers are recommended.
2. To visit all the scattered scenes in Shi Lin, it is wise to hire a car.