Cuihu Park is located in the north of Kunming City, opposite to Yunnan University. As a medium-sized lake in the garden-like city, Cuihu is the first scene most people may come upon as they arrive for their holiday. There are green trees around the emerald lake and lovely lotus ponds. In winter, people come to enjoy spending time watching the thousands of red-billed gulls.

The lake is at the heart of the park. Two earth banks that separately connect north and south and east and west divide the park into five parts. In the middle section is the ‘Mid-lake Pavilion’ and the ‘Fish Observation Pavilion’, which dates back to the Qing Dynasty; in the Southeast section lie the ‘Moon and Water Pavilion’ and ‘Golden Fish Island’; in the Northeast section lie the ‘Bamboo Forest’, ‘Nine Dragon Pond’ and ‘Spring Pavilion’. Folk songs can be heard in Spring Pavilion during festivals. In the South section lie ‘Gourd Island’ and ‘Zigzag Bridge’, and in the West section lies ‘Lake Core Pavilion’. The prosperous willows on the embankment, the lotus in the ponds, and the pavilions and other buildings in the islands are some of the pleasant decorations of the park. 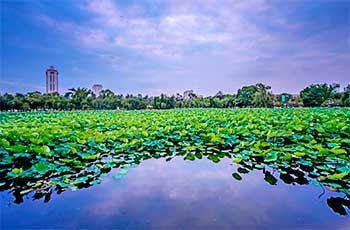 Once a lake bay in Dianchi Lake, Cuihu Lake is a crystal clear lake since the water level has dropped. There used to be nine spring holes in the northeast of the lake, so Cuihu was also known as Nine Dragon Pond. The lake is bright and green among the green trees. A beautiful pavilion stands in the middle. It is like an emerald jewel in Kunming. It is sometimes called the "Jade of the City".

Golden Fish Island is lush with cedar, camphor and other trees. The shaded areas and the paths lined with flowers meander off into the distance. The birds are singing and the breeze can be felt from time to time. Visitors who stroll here could have a cup of tea in the comfortable outdoor seats.

Bamboo Forest Island has earth banks with bamboo forest casting their shade. Many ivies and flowers intertwine. Tourists can sit in the shade and watch the lotus flowers in full bloom under the sun. Folk artists often come to perform songs, and dances, and play musical instruments. Audiences automatically gather around the artists and the scene is lively. 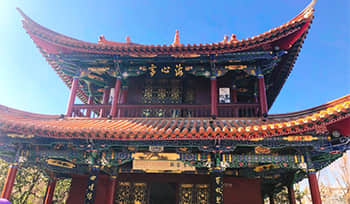 Haixin Pavilion was once described in a couplet as "between the tall building in the east and the corridor in the west, we have a pavilion standing in the mid-lake". The couplets and plaques in Haixin Pavilion kind of pushed to become an attraction. Literati talk about history in the lovely shade and with the gentle breezes. Laughter, poems, and anecdotes were all in the wind. In the early years of Jiaqing's reign (grandfather to Tongzhi Emperor), Ni Chun determined to construct more places for graceful exchanges between his peers in Cuihu, and he worked with Yuyan, a monk, to established the Lotus Temple close to Haixin Pavilion.

When winter begins (the day that marks the beginning is called Li Dong), thousands of red-billed gulls will migrate from the north to live here through the winter. Citizens and tourists come to have a nice time with the lovely creatures.
Tips:
1. Do not throw stones at red-billed gulls.
2. Littered plastic bags can be devoured by red-billed gulls.