As one of the eight major cuisines in China, Hui Cuisine's history dates back to the South Song Dynasty in She County (the ancient capital of Huizhou). Its menu offers many delicacies both from the land and hunted game. In terms of cooking methods, Hui Cuisine boasts stewing, steaming and frying with starch. The selection of condiments and heating methods are designed to favor the natural taste of the food. The oil used is good for the digestion and therefore also for the skin. And last but not least, the colors of dishes add another dimension to the distinctive cuisine. 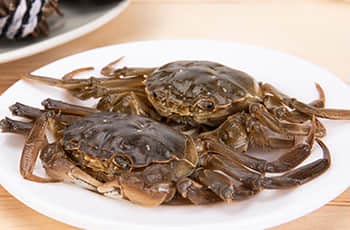 To prepare this dish you first process live crabs, each weighing 150 grams, and put them into small jars.
Then pour soy sauce into the jar and add local Hui Liquor (Huangshan Honey Liquor), diced ginger, garlic, icing sugar and sorghum liquor. Use oily paper to seal the jar. Take the crabs out for cooking after a week. Drunken crabs after the proper process may have a shelf life of up to two months.
Characteristics: Tunxi Drunken Crab is green and complete. It is tender and tastes delicious. A bite of the crab with the aroma of liquor also delivers a great aftertaste.
Recommendation:
Sanyi Local Restaurant
Address: Luoning Street, Xiuning County, Huangshan City, Anhui Province, China (close to Xinyu Holiday Inn) 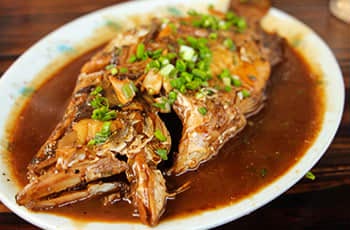 This is the brand of Hui Cuisine. Some people call it "Tongxian Yu" or "Yanxian Yu". "Yanxian" means stinky in local Hui dialect.
The Xian (fresh) fish is marinated with light saline water for six to seven days. The water has to be around 25℃ (77°F). By then, the scales do not peel off and the fish does not go bad at all. The slightly stinky smell is the foundation of Chou Guiyu. It is not unlike the beauty of Chou (stinky) Tofu.
Characteristics: the fish is tender and the taste is flowing in the air. It is an easy taste for people to fall for.
Recommendation:
Piyun Hui House Cuisine
Address: No. 11-1, Binjiang Center Road, Tunxi District, Huangshan City, Anhui Province, China. 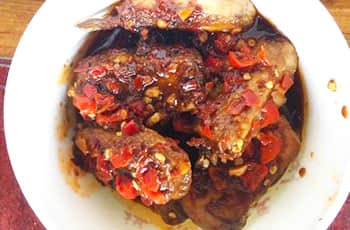 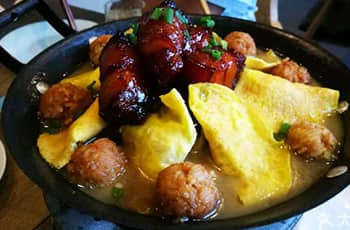 Here comes the hot pot exclusive to Mt. Huangshan area for all seasons. All prepared ingredients are laid in a big iron pot. Shredded carrots, dried long beans, the fallen tender outer layer of spring bamboo shoots, white gourd and winter bamboo shoots are put at the lower layer. Then meat, tofu, duck meat, meatballs, chicken meatballs and hunted game are piled on top. For each ingredient added, one level is added to the cuisine. Higher layers usually contain high-end ingredients. The contents in the pot have to be heated and boiled for several minutes as each layer is added. Then the whole pot is slowly stewed for another three to four hours. Then the gravy from the pot is carefully spooned over the contents.
Characteristics: All the contents are tender and complete in the pot. It is extremely delicious but the rich nutrients do not make it greasy. In addition, the hot pot looks very beautiful with the color of the food retained.
Recommendation:
Lotus Hotel Huangshan
Address: No. 14, Xianren Dong North Road, Tunxi District, Huangshan City, Anhui Province, China 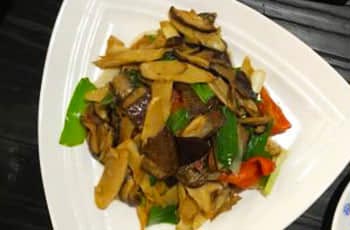 Bamboo shoots from Wenzheng mountain are the top-quality bamboo shoots used in Hui Cuisine. To supplement the aroma, add sausages, shiitake mushrooms and other fragrant ingredients. Cook the bamboo shoots with bones (the removed meat is for ham) and fresh meat with the container covered. Add sausages and shiitake mushrooms in the course of cooking. Remove the bones when the dish is cooked.
Characteristics: the bamboo shoots are not only tender, but also delicious.
Recommendation:
Piyun Hui House Cuisine
Address: No. 11-1, Binjiang Center Road, Tunxi District, Huangshan City, Anhui Province, China. 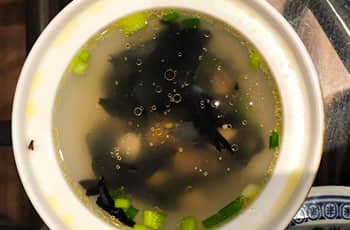 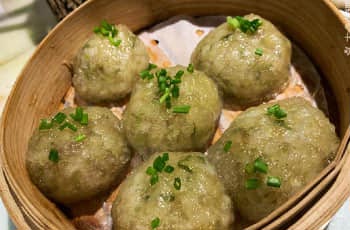 This traditional cuisine is also called "Meatball in the Fine Sand". Fried rice that looks like fine sand is prepared first. The meatball is fried and covered with sugar juice. The light, translucent sugar juice is also called "Light Yuanzi". Anhui Yuanzi is delicate and stylish.
Characteristics: it has a crisp outer layer and sweet filling
Recommendation:
Huiyuan Yilou Restaurant
Address: No. 807, Huizhou Huayuan, She County, Huangshan City, Anhui Province, China (opposite to Huiyuan Community) 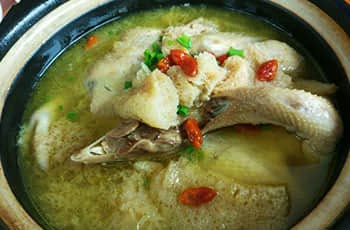 Free-range hens from the pine forest of Huangshan area are used. Stew the whole hen over a slow fire. Add local agaric mushrooms, bamboo and ham in the cooking.
Characteristics: The chicken in the soup is mouthwatering and inviting. The aftertaste is difficult to forget.
Recommendation:
Yuanlaiju Hui Cuisine
Address: No. 15, Business Street, Hong Village Scenic Area, Qian County, Huangshan City, Anhui Province, China. (It’s close to a bank) 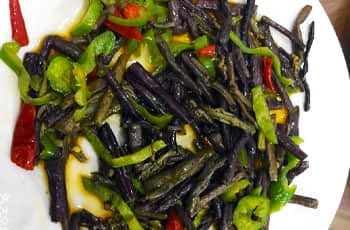 The fiddlehead fern is a thin purple-black bamboo-shaped vegetable which is no stranger to local people. It is highly nutritious. Clean some fiddleheads and cut into small sections. Add vegetable oil and other condiments to fry. The dish can be served up in just a moment.
Characteristics: It has a refreshing taste and feels slippery on the tongue. People believe that the dish is better for their health than the general daily food.
Recommendation: The fiddlehead is rich in nutrition and good for health.
The Mountains Food Club
Address: No. 30 Qianyuan South Road, Tunxi District, Huangshan City, Anhui Province, China. (next to Hanting Hotel)