One of the Top Lake Scenes in China

Thousands of islets of different shapes and sizes are scattered in the Lake. The lake was divided into many small lakes with areas of water of different widths, with twists and turns. The resulting maze on the lake is just splendid. There are scenes with names such as the Hundred-Lake Islands and Pearl Islands. Where the islands are sparse, the lake is open, far-reaching and vast, like the sea. The gleaming blue expanse of water is fascinating and colorful. Thousand Islets Lake features rich geomorphological landscapes, in which the combination of limestone, Danxia landforms and a thin layer of limestone can be found. 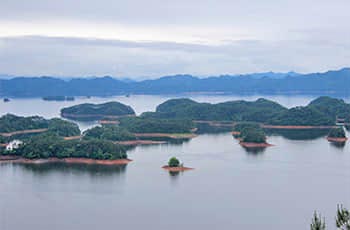 The outlook from the highest island in Qiandao Hu affords a view of all the lakes.

This poetic island is located among the central lakes. Surrounded by five lakes, it has scenes named Affection Garden, Leisure Garden, Connection Garden, Soul Garden and Dream Garden. The ‘Lock’ themed dream garden is a eyes-wide-open world, in which friends or lovers can have their special locks fastened here for best wishes. 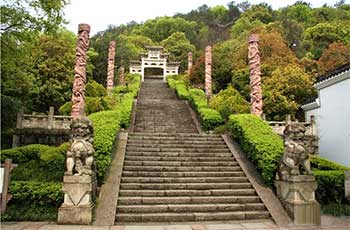 The island is shaped like a Chinese dragon taking off. There is a folk song introducing the local scenes as "Tung Bridge, Iron Well and Xiaojin Hill, Stone Gorge, Ancient College and Dragon Mountain." A brick and wood temple that commemorates Hai Rui (a renowned senior officer in the Ming Dynasty) has been built on the island. The hall and the courtyard is an example of well-integrated architecture. The overhanging eaves and the beautifully carved beams are elegant and grand. A tablet corridor is set up in the front hall, where most of the calligraphic works have been contributed by both ancient and modern masters. The Chinese character "Shou" (longevity) is the most attractive one. A three-meter high statue of Hai Rui stands in the back hall, with paintings on the two walls at both sides indicating his contribution to the country.

The more than 90 islets on the northwest side, like a chain of pearls scattered on the lake, can be seen from the top of Huangshan Tip. When you look into the distance of the southeast side, you can see a deep canyon which lies between Huangshan Tip and Xianshan Island. Laoshan island is hidden if the tourists look to southwest. Various islets and circuitous lakes also provide picturesque scenes.

Osmanthus Island is one of the earliest tourist attractions developed in Qiandao Hu. It is a whole world of Osmanthus fragrans. Most of the “sweet omanthus” (as they are commonly known) erupt out of jagged rocks with grotesque shapes. A poem goes, "deep affection can always be conveyed by Osmanthus fragrans". The calcareous karst landform has developed a variety of wonderful landscapes over the centuries. Many of the natural scenes have beautiful names such as Black Dragon Coming out of Water, Dock from the Lunar Palace, Rhino Howling to the Moon, Moon Reflection in the Placid Water, Gate to the Heavy, Cave of Flock of Sheep, Outlook Platform for the Lakes, Arduous Journey, etc.