Meijiawu is a 600-year-old village that is 10 km out of Hangzhou metropolitan area. It is considered one of the Longjing (literally "Dragon Well") Tea production areas. As the West Lake Longjing Green Tea first rate national reserve, it become a scenic spot which is characterized by being a natural village and tea culture scenic spot. Meijiawu enjoys titles such as "Hangzhou Landscaping Village", "Well Constructed Village" and "Zhejiang Provincial Level Patriotism Education Base" (Premiere Zhou Enlai visited the village many times), etc. There are about 500 farmhouses in this wooded country where there are impressive tea fields on plains, on hill sides, terraces and by the rivers. Here are five peaks within Xihu (West Lake). Ranked in order of desirability they are Lion (Shifeng), Dragon (Longjing), Cloud (Yunqi), Tiger (Hupao) and Plumb Flower (Meijiawu). 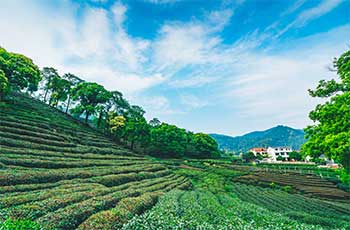 The whole village is surrounded by tea fields. When enjoying the simple life of wandering around tea plantations, the fragrance of the tea is a real treat. After the Meijiawu-Lingyin Channel, the tea plantations over the hills and terraces, as well as beautiful teahouses every one to two houses, can be clearly seen in the picturesque scenic spot surrounded by green hills. Walking out in the fresh air is really pleasant.

Premiere Zhou Enlai Memorial House is an old building which has been decorated to commemorate the much loved and respected Premiere's visit here, as donated by local villagers in the 1950s-1960s. The room upstairs is the reception room and the room downstairs is the exhibition room, showing the relevant documents, photos and objects from when the Premiere visited Meijiawu in 8 chambers. Photos, inscriptions, calligraphy and painting works from the founding members of China, such as Dong Biwu, Marshall Chen Yi (one of the founders of the Army in China, the first Shanghai Mayor in China and Minister of Ministry of Foreign Affairs after Premiere Zhou Enlia and a poet) and Deng Yichao (one of the critical founding members of China and Premiere Chou's wife). Video of the TV documentary Premiere Zhou and Mejiawu is displayed in the Memorial House.

Plantation Ritual Hall (Li Geng Tang) is an ancient house of the authentic Ming and Qing construction style. The simple character distinguishes itself from the newer modern houses along the streets. The three Chinese characters “Li Geng Tang” on the plaque were written by calligrapher Zhang Zhao (an Imperial Scholar, or Jin Shi in the early Qing Dynasty) in the eighteenth century. Zhang Zhao assumed office during the times of Emperors Kangxi, Yongzheng and Qianlong (that was quite a long and loyal service). The renowned Yueyang Tower Notes written on the wall of Yueyang Tower (one of the three Towers in Jiangnan Area) were his work.