one of the most iconic buildings in Guangzhou

Highlights of the Memorial Hall

Zhongshan Memorial Hall was built to commemorate the great revolutionary leader Sun Yat-sen and it has witnessed many historical events in Guangzhou. Today it is one of the most iconic buildings in Guangzhou and an important venue for large-scale gatherings and performances in Guangzhou. This is a magnificent octagonal palace-style building with a strong ethnic character. The central high-hanging blue-red lacquered gold plaque has Dr. Sun Yat-sen's chirography, “For the Public”. These words are powerful and forceful. Behind the memorial hall is an independent small room – Sun Yat-sen Historical Exhibition Hall, which informs about the life of Sun Yat-sen. 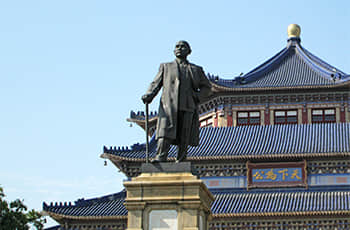 The bronze statue of Dr.Sun Yat-sen

A bronze statue of Sun Yat-sen stands in the center of the memorial hall. In 1956, a cement image was created by the sculptors led by Yin Jichang (the surface was plated with copper, and then replaced with a bronze statue in 1998). The statue is 5.5 meters in height and 3.9 tons in weight, and depicts Dr. Sun Yat-sen giving a lecture at Sun Yat-sen University. On the pedestal of white granite under the bronze statue, the contents of the "Founding Outline" written by Dr. Sun Yat-sen are engraved.

People tend to ignore the nine steps and five steps sections from the bronze statue of Sun Yat-sen to the main entrance. In ancient China, the yang/positive numbers include only odd numbers and the yin/negative numbers include only even numbers. Of all the yang numbers, nine is the supreme one and five is the central one. So people use nine and five to indicate authority. The Revolution of 1911 led by Dr. Sun Yat-sen overthrew the feudal monarchy that had lasted for well over 2,000 years and, for the first time, a democratic republic in Chinese history was forged. 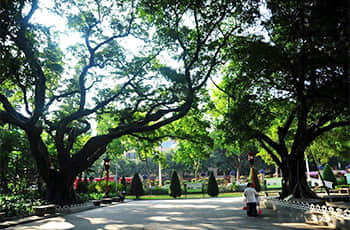 The Zhongshan Memorial Hall is not only home to the oldest kapok in Guangzhou, but also the two largest white orchid trees in Guangzhou. They were grown there soon after the foundation and completion of the Hall. Over a half a century, the trees have grown next to and accompanied the hall. The evergreen canopy can shadow over 100 m2 and guard the Hall like a royal centurion. Every year in the early summer (June) and late autumn (October), the fragrant, white and innocent flowers cover the branches. The fragrance carries for quite long a distance, symbolizing the great achievements of the revolutionary pioneer, Dr. Sun Yat-sen.