Shameen has been an important commercial port in Guangzhou for more than 100 years. More than ten countries once set their consulates there. Nine foreign banks and over 40 foreign firms used to operate there. Canton Custom Club and the Canton Club can be found there. Shameen witnessed the vicissitudes of Guangzhou's modern history as Sun Yat-sen and Premier Zhou Enlai once stepped onto this land. It has become the epitome of China's modern history and foreign settlement. The European-style buildings on the island of Shameen have formed a unique museum. It has been developed into a national 5A level scenic spot and is a famous tourist area, scenic spot and leisure resort in Guangzhou.

Shameen Island is greatly enriched by examples of European-style architecture in Guangzhou. Located to the west of Guangzhou City and close to Baie Pool adjacent to the Pearl River, it is a famous tourist area and historical cultural relics protection area in Guangzhou.

Church of Our Lady of Lourdes (Catholic Church) 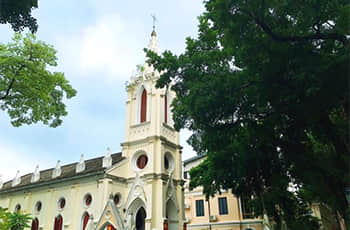 Church of Our Lady of Lourdes

This was constructed in the French Concession, and was formerly known as the Shameen Catholic Church. It was named after the Notre Dame Statue which was placed in the mountain on the south side of the garden. The original owners were the church goers from the French Consulate in Guangzhou. It was located at the northeast corner of the intersection of Shamian Avenue and Shamian 1st Street. It consists of the lobby, the priest’s building, the nuns’ building, and the Notre Dame Church. The lobby is in front, the priest’s building is in the east at the back, and the nuns’ building is in the west at the back. There are two existing annex buildings, one is a two-story building and the other is a bungalow. The church is basically well preserved. The façade has windows, gates, and towers with spires. The complex glazing of the octagonal spires are fitted out with complicated windows, continuous pointed arches and buttresses. Those decorations show the endeavor the church made to present the mysteries of heaven.

The Soviet Union’s Consulate is located at No. 68, Shameen Street. It is a three-story building made from bricks and reinforced concrete structures. It faces south and resembles the style of the Victorian era in the UK. The main building of the former Soviet consulate has a small courtyard and an enclosing wall. The façade and the east and west sides are all set with verandas, and the second floor of the rear façade is provided with a cantilevered balcony and a concrete bridge leading to the auxiliary building. In addition to the façade of the whole building, the overhanging eaves, railings and parapets are decorated with high-quality red bricks without paint. The joints are made from cement and lime joints. So, people call it Western Red Building. 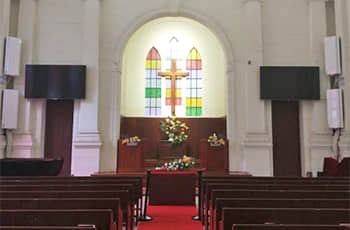 This is a dedicated church in the British settlement, only for foreign church goers. Built in 1864, it is in the Shameen 5th Street. Located at the western end of the settlement, it is now managed by Hong Kong Anglican Church (Episcopal). It has been hosted by British pastors and the prayers are delivered in English. Since the Church is a well-preserved Christian building, many couples include it in their wedding ceremony photos. Hong Kong Anglican Church (Episcopal) has manage the Church since World War II. It was used by the government after 1949 and returned in 1980. All religious activities were resumed in 1991 and it was renamed Shameen Hall.