One of the Oldest Zoos in China

The zoo is remarkable for its having the most comprehensive collection of species in China. Its history dates back to the late Qing Dynasty in 1906. The zoo is divided into three zones: the East, the South and the North Zone. The main entrance leads to the East Zone. The Beijing Aquarium is in the North Zone (fee charged separately). 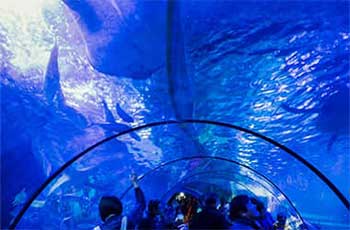 The Beijing Aquarium is one of the largest inland aquariums in the world. It provides various services such as viewing, popular science education, and recreation.

The spectacular Beijing Aquarium is unique in that it is shaped like a giant blue conch (shell) that is lying on a sandy beach surrounded by greenery and clusters of flowers. The Aquarium is divided into seven thematic exhibition areas with the aim of “cultivating the public, informing the pupils, and maintaining a reasonable ecology”. There are more than a thousand marine species and tens of thousands of creatures managed and displayed. It promotes the awareness of aquatic organisms to visitors through plentiful fish displays, protection of precious and endangered species, and various popular science activities. Visitors improve their knowledge about marine creatures and enhance environmental awareness. They can enjoy the tour and raise the awareness to “love marine animals and protect our planet”. 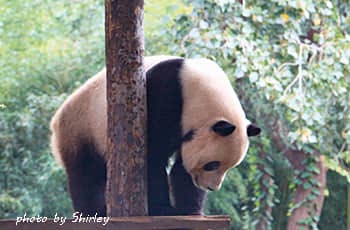 The Panda House is mainly composed of the Asian Games Panda House and Olympic Games Panda Museum. The former house was built in 1989. Its structure refers to Chinese classical gardens and the form of a Taiji diagram. It is shaped like bamboo shoots. The 11 pairs of arches are like the bamboo knots which enclose bamboo shoots. The house and the grounds are divided into parts for adult pandas, young pandas, and parent & child pandas for the exhibition.

Golden snub-nosed monkeys are unique to China. They are as precious and renowned as pandas are. Golden monkeys fall in three categories: Sichuan Golden Monkey, Guizhou Golden Monkey and Yunnan Golden Monkey, all of which have been listed with the first class protected animals. Beijing Zoo is currently the only zoo in the world that exhibits all three golden monkeys at the same time. 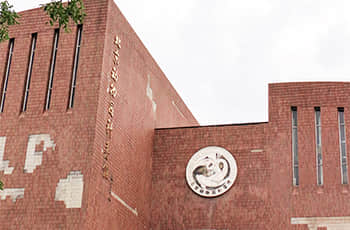 The Zoology Museum covers an area of 3,000 m2 and has a display area of 5,500 m2. It is by far the largest building for popular science among all the zoos worldwide. The three layered museum has eight venues: plants, insects, approaching zoos, approaching nature, knowledge of animals, biodiversity, temporary exhibition halls, and education centers. The content of animal knowledge displayed is very extensive, covering those flying in the sky, running on the ground and swimming in the water. High-tech techniques are used to vividly demonstrate all images, which are artistic, informative and interesting. The display of various animals do expand visitors’ horizons, increase their knowledge and cultivate the love for living creatures. People learn about animals and respect for nature here.