The Center of Beijing City

Stretching from Tian’anmen in the north, Zhengyang Gate in the south, National Museum of China in the east and the Great Hall of the People in the west, Tian’anmen Square is 880 m long from south to north and 500 m wide from west to east, with the total area being 440,000 sqm. As the largest city square worldwide, it can host gatherings of 1 million people.

All the ground has been paved with light-colored granite flagstones that are specially processed. In the center of the Square stand the Monument to the People’s Heroes and the solemn Chairman Mao Memorial Hall. Beijing Working People’s Cultural Palace and Zhongshan Park as two components of Tian’anmen Square are on each side of the square.

Major celebrations of all kinds are often held here. Flag-raising ceremonies every morning attract numerous visitors. Visitors can wait for the flag-raising ceremonies half an hour in advance near the Square. Police are assigned at all entrances and exits before the ceremonies to keep order. Guide lines are deployed outside the west gate of the National Museum of China and the east gate of the Great Hall of the People, where visitors are the most concentrated. Visitors waiting for the ceremony stand in line under the guidance of the police. When the Square opens to the public, the police guide and escort visitors in.

Festival flag-raising ceremonies happen on New Year’s Day, Spring Festival, International Labor Day, National Day and the first day of every month. Thirty-eight national flag guards and sixty-two police officers from the band of the Chinese People's Liberation Army perform festival flag-raising ceremonies. Ode to the Motherland is played when they march forward and the National Anthem is played during the ceremonies.

Flag-raising ceremonies on other occasions are more ordinary . On these days the ceremonies are performed by 38 national flag guards and the National Anthem is aired during the ceremonies.

Times for all ceremonies change according to the time of sunrise.

Timetable of Flag-raising Ceremonies in 2017: 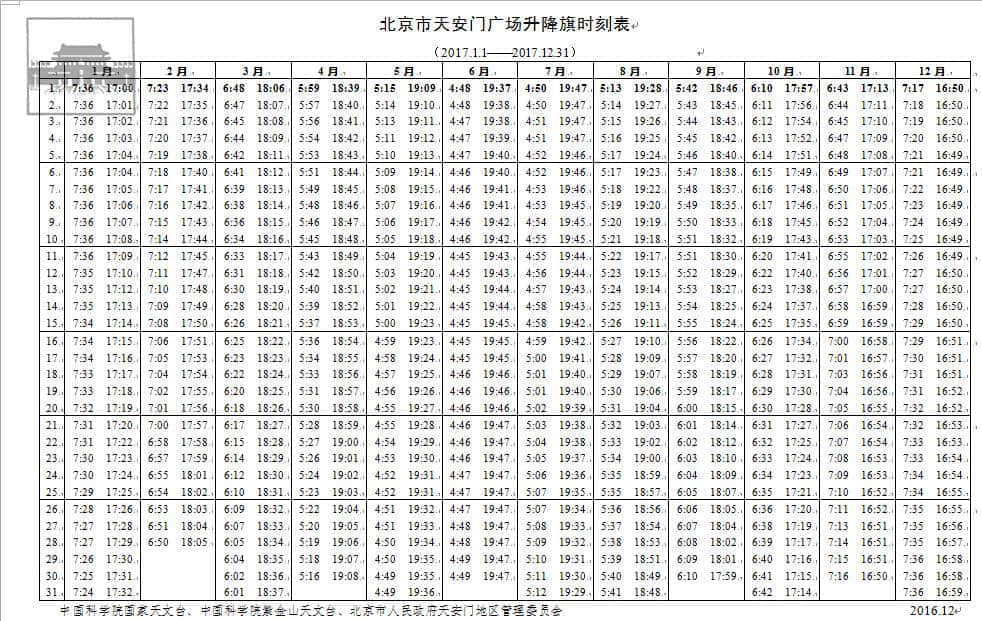 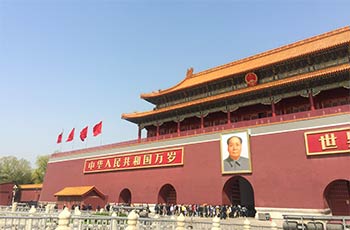 Tian’anmen, first built in the 15th year under the reign of Emperor Yongle (AD 1417) in the Ming Dynasty, was the front door of the imperial city Beijing in the Ming and Qing Dynasties. It was originally named Chengtian Gate, with the implication of following the rule of the heaven. The designer was Shi Kuaixiang, an architect employed by the emperor in the Ming Dynasty. Its name was changed to Tian’anmen in the 8th year under the reign of Emperor Shunzhi (AD 1651) in the Qing Dynasty. On October 10th, 1925 (the 14th year of the Republic of China), the Palace Museum was founded and Tian’anmen began to open to the public. On October 1st, 1949, the founding ceremony of the People’s Republic of China was held here. Tian’anmen was designed into the national emblem, thus becoming the symbol of the People’s Republic of China. In 1961, Tian’anmen was listed in the first batch of national key cultural relics protection unit by the State Council, PRC.

3. Great Hall of the People

The Great Hall of the People is the venue where the National People’s Congress hold meetings, and the workplace of the standing committee of the Chinese People's Political Consultative Conference.

5. Monument to the People’s Heroes

Standing in the center of Tian’anmen Square, the Monument to the People’s Heroes was built by the government of the People’s Republic of China in honor of people’s heroes who had died in all fights against enemies home and abroad, as well as for national independence and freedom of the people since 1840. Construction of the monument with 170,000 pieces of granite and white marble finished on April 22, 1958. 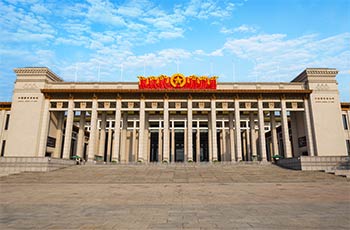 The National Museum of China as a famous museum records valuable cultural items in ancient, modern and contemporary China. As a comprehensive museum, it shoulders such functions as collection, exhibition, research, archaeology, public education and cultural exchanges. There are over 1 million items collected and 48 exhibition halls here.

Seven reviewing platforms are on each side of Tian’anmen symmetrically in front and serve for major celebrations, such as National Day Celebration, with a total capacity of 21000 people. The platforms were originally built with bricks and wood for the founding ceremony of People’s Republic of China.

As the south gate of inner city of Beijing in the Ming and Qing Dynasties, Zhengyang Gate is the only one kept intact. Beijing Folklore Exhibition Center is on the gate tower.