As the largest surviving complex in the world for making sacrificial offerings to heaven, the Temple of Heaven is the most complete historical, imperial building in China dedicated to sacrifices. The emperors in the Ming and Qing Dynasty (1368-1911) came to offer sacrifices to Heaven, and pray for rain and a good harvest. The layout and architecture of the Temple of Heaven incorporate philosophy, cosmogony, art, science and of course sacrificial rituals of the time it was used by people propitiating the gods. The magnificent temple is a showcase for cultural and political concepts of the time as well as historic characteristics. In 1998, it was listed as a World Cultural Heritage site by UNESCO.

Quick Facts of Temple of Heaven: 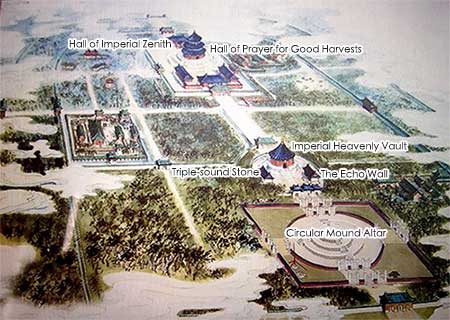 a bird’s-eye view of Temple of Heaven

The building layouts are in line with the traditional Chinese belief that the earth is square and heaven is round. The temple’s bases are square, and the walls are round. . The northern part of Tiantan Park represents heaven and was purposefully built at a slightly higher elevation. The semicircular outer wall that surrounds the northern part of the park was meant to symbolize the roundness of heaven. Conversely, the squareness of the earth is symbolized by the square layout of the outer wall that surrounds the southern part of Tiantan Park. The northern and southern parts of the park are connected by the Vermilion Steps Bridge (a.k.a. Danbi Bridge or Imperial Walkway Bridge). As the southern end of the bridge is lower than the northern end, the emperor and his entourage would symbolically walk from earth to heaven on this ‘Sacred Way’ when crossing the bridge from the south to the north. Of the three different routes across the bridge, only the emperor was allowed to use the central one. The princes and high-ranking officials respectively used the other two routes to the left and right of the central Imperial Route.

2. What is the Temple of Heaven made out of?

The Temple of Heaven was built using large stone slabs, marble that was quarried nearby, bricks, roof tiles, and wood.

3. Why was the Temple of Heaven built?

It was built as the venue for annual ceremonies of prayer for a good harvest by the emperors of the Ming and Qing dynasties.

4. When was the Temple of Heaven built? 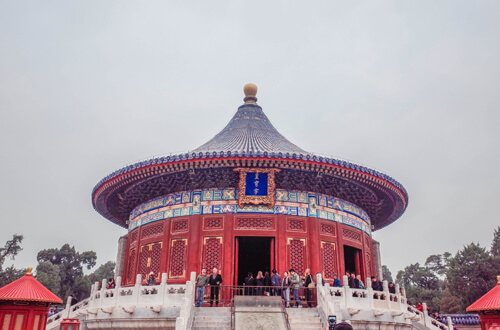 During the Second Opium War (1856 - 1860), the Temple of Heaven was occupied by the Anglo-French alliance. In 1900, the tables turned, and the temple was occupied by the Eight Nation Alliance during the anti-Christian and anti-imperialist Boxer Rebellion. For a year, the complex acted as the force’s temporary command headquarters. After the downfall of the Qing Dynasty, the Temple of Heaven fell into disuse and neglect, leading to the collapse of several halls. These were later restored and in 1918, the temple complex was turned into a public park.

5. Why is the Temple of Heaven important?

In Chinese culture, Heaven is the principal Chinese deity and the Supreme Ruler of the universe. Heaven directs all things and is an ever-present governor both in the natural and in the moral sphere. The emperor is designated as the Son of Heaven (天子), only the emperor can offer ritual sacrifices and make a r eport to Heaven. The Temple of Heaven served as the altar to Heaven. It was the most important link between the emperor and Heaven. With an area of 2.7 million square meters (667acres), the Temple of Heaven is larger than the Forbidden City which is 720,000 square meters (7,800,000 sq ft). Emperors were not allowed to build a house for themselves that is greater than the earthly dwelling devoted to Heaven.

The Temple of Heaven is famous for its precise architectural layout, unique structure, and splendid decorations. With a total area of 2.7 million sqm, the Temple of Heaven is circular in the north and quadrate shape in the south, indicating round heaven and square earth. The complex is divided into an inner section and an outer section. The major buildings are in the inner section. Two building groups, Circular Mound Altar, and Imperial Heavenly Vault are in the south, and the Hall of Prayer for Good Harvests and Hall of Imperial Zenith is in the north, and are connected by a paved path over Danbi Bridge. The outer section, with verdant and luxuriant cypresses, mirrors a grander image of the major building complex. Acoustic principles are widely applied in the Echo Wall, Triple-sound Stone, and Dialogue Stone, reflecting mature architectural skills in ancient China.

1) Hall of Prayer for Good Harvests

The round architecture Altar of Praying for Good Harvests has become one of Beijing’s truly prized landmarks. You can find it in books and magazines and on travel websites. It is a combination of altar and hall, which was built according to the ancient saying of “worshiping the Heaven under the roof”. The three-story altar is round in shape, with a height of 5.6m, a bottom diameter of 91m, a middle diameter of 80m, and a top diameter of 68m. The hall is 38m high with a diameter of 32.7m, decorated with three layers of blue-glazed tiles. Inside the hall, there are four large central pillars representing the seasons, the 12 in the next ring the months of the year, and the 12 outermost columns represent the day or 12 ‘Chichen’ of two hours each. 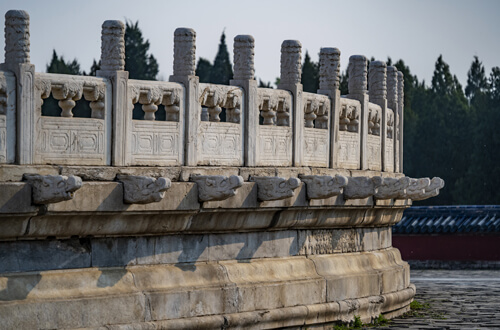 The three-story Circular Mound Altar is in the shape of the sky, with a height of 5.71m, a bottom diameter of 54.92m, and a top diameter of 23.65m. There are stairs with nine steps on each of its four sides. In the center of the top story is a round stone, which is surrounded by nine fan-shaped stones, with the number of stones in outer layers increasing by a multiple of nine. The numbers of the railing boards and balustrades are also multiples of nine, all being symbolic figures of the astronomical phenomena.

Imperial Vault of Heaven is supported by sixteen pillars, eight peripheral pillars in the outer circle and eight golden ones in the inner circle. A gilded bracket system connects all pillars to support the ceiling and caisson. Inside the Vault are images of dragons and phoenixes, with the gilding image on the ceiling being two dragons playing with a pearl and the image on the domed ceiling caisson being a golden dragon. The span of brackets and caisson in the Vault is unparalleled among ancient Chinese buildings.

4) The Echo Wall and Triple-sound Stone

The round Echo Wall is the outer wall of the Imperial Vault of Heaven, with a diameter of 65.1m and a thickness of 0.9m. The Wall is flat and bright. If two people stand beside the east Wall and west Wall separately and speak in low voices facing the north, they can hear each other clearly like on the phone.

Built in the 18th year under the reign of Emperor Yongle (1420) in the Ming Dynasty, the Hall of Imperial Zenith in the north outside the inner short walls of the Altar of Praying for Good Harvests is used to enshrine and worship related gods. You can reach the Altar after passing three colored-glaze doors from the Hall. The ceiling of the Hall is decorated with blue-glaze tiles. The Hall has a high base surrounded by stone balustrades. In front of the Hall is a Moon-watching Platform, which has eight-story stone steps in front of it and on the right and left sides. There is a Guxi Gate (ancient door) inside the yard. Under the eaves hangs a plaque with characters of “皇乾殿” (Imperial House) written by Emperor Jiajing in the Ming Dynasty. 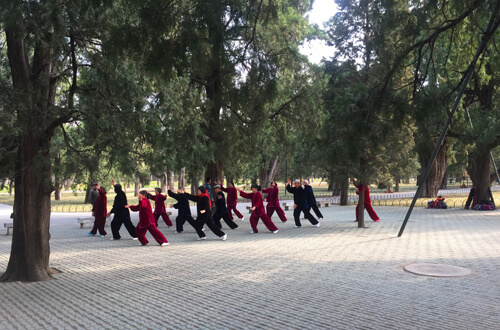 Play Taiji at Temple of Heaven

If you want to learn more about how Chinese people do their morning exercise, there is no better place than the Temple of Heaven. Here you can find people doing Taijiquan, sword dance, fan dance, Chinese yo-yo, jogging, and stretches. A corner of the park is equipped with colorful exercise machines and you are welcome to try them out. If you want to learn Taijiquan, you can easily find a teacher here.

7. What are the recommended routes for visiting?

We recommend two routes, one is starting from the East Gate, where you will find a lot of local people doing their morning exercises inside the East Gate, then a long corridor, the Hall of Prayer for Good Harvest, the Imperial Vault of Heaven, the Circular Mound Altar and finally exit from the South Gate.

Another route is starting from South Gate, then Circular Mound Altar, the Imperial Vault of Heaven, the Hall of Prayer for Harvest, the Long Corridor, and finally exiting at the East Gate.