Temple of Confucius and the Imperial College

The institution of higher education in ancient China 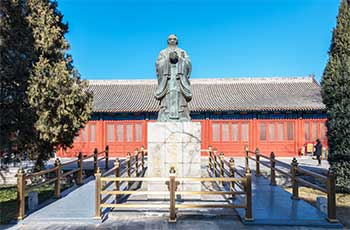 The Temple of Confucius is the site where Confucius was enshrined and worshipped in the Yuan, Ming and Qing dynasties. The temple encompasses an area of 22,000 square meters, with three courtyards.

From south to north, the buildings on the middle axis include Dacheng Gate, Dacheng Hall, Chongsheng Gate and Chongsheng Memorial Hall. On the east side of the front courtyard, there stand the Stele Pavilion, Shenchu, Xingsheng Pavilion, and Jing Pavilion. On the west side, there stand the Stele Pavilion, Zhizhaisuo, and Chijing Gate that connects with the Imperial College. On both sides, there are rows of steles with inscriptions of the names of Presented Scholars (jìn shì), as well as their birth places and examination ranks. The steles are valuable physical materials for the studies on the institution of China’s Imperial Examination. Every day, there are a few rounds of Dacheng Liyue, a performance of traditional rite and music in Chongsheng Memorial Hall.

The performance conveys the motif of “individual cultivation with rite, and education through music”, displaying the traditional culture and art in ancient times. The show is recommended because you are likely to really appreciate it.

There are also exhibitions regarding sacrificial ceremonies for Confucius, such as the memorial tablets and cultural relics. If you are interested, you may also have a look. One hour is quite sufficient to visit the Confucius Temple. 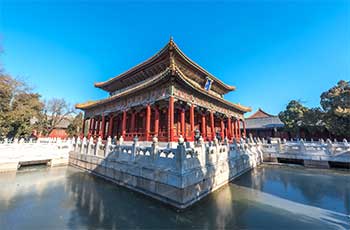 The building of Imperial College

The Imperial College is the supreme college and education governance body. It was also the place where the emperor gave lectures in person, and was also known as Supreme Academy or National Academy.

The main buildings of Imperial College face southward, and they also encompass three courtyards, with a total area of more than 27,000 square meters. Along the middle axis, there are a row of gates, including Jixian Gate (main gate), Imperial College Gate (secondary gate), Glazed Archway (landmark of Imperial College), Biyong Hall, Yiluntang (the emperor’s lecture room in ancient times), and Jingyi Pavilion. The students studying at Imperial College are known as jiansheng (Imperial College Student).

The Imperial College accepts not only students of diverse ethnic backgrounds from around the country, but also from other nations. It played a positive role in nurturing talents for all ethnic groups in the country and promoting cultural exchanges between China and foreign countries. With a history of more than 700 years, the main buildings are still in good condition. It is the only ancient highest education institute that is well preserved.

The Imperial College enjoys a world-wide reputation for its long history, unique architectural style, and rich cultural essence. Generally, it takes one hour to tour the attraction.