One of the world’s largest imperial palaces

The Summer Palace, formerly known as Qingyi Garden, is an imperial garden from the Qing Dynasty. Situated in the western suburb of Beijing, it is 15 km away from the city. Covering an area of 290 hectares, the Palace is next to the Old Summer Palace. With Kunming Lake and Longevity Hill as major sites and the West Lake in Hangzhou as its blueprint, the Palace is a large-scale landscape garden built in the garden style of South China. As the best preserved imperial resort, it is known as the Museum of the Imperial Garden and a national key scenic spot.

1. A Brief History of Summer Palace

The origins of the Summer Palace date back to the 12th century before Beijing became China’s capital city. Emperor Qianlong first built the palace in 1750 on the site of what had long been a royal garden, named Qingyin Garden ( Garden of Gentle Waves). The emperor built the garden to commemorate his mother’s 60th birthday. Unfortunately, the garden was largely destroyed by Anglo-French troops in 1860, following the events of the Opium Wars. In 1886, the Dowager Empress Cixi reallocated navy funds to restore the palace and park to their former glory. She renamed it Yiheyuan, or “Garden of Good Health and Harmony.” 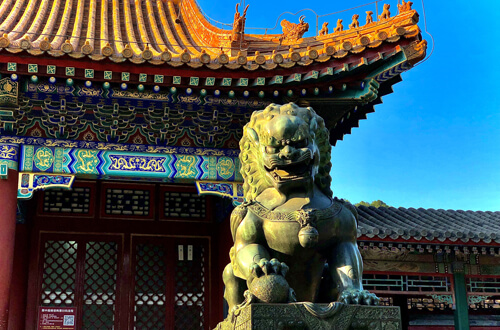 In 1900, during the Boxer Rebellion, the palace was occupied by Western troops from Russia, Britain, and Italy, where they were stationed for the year, however, during that time the furniture was looted and decorations were destroyed.

In 1912, the Qing Dynasty was overthrown by the Chinese Revolution of 1911 or Xinhai Revolution, the last emperor, Puyi, was permitted to live in the Forbidden City. The Summer Palace was maintained as Puyi’s private property and was open to the public in 1914.

In 1924, Puyi was evicted from the Forbidden City by warlord Feng Yuxiang. The Summer Palace was confiscated by the government and opened to the public as a public park. Due to its remote location and bad transportation connection, there were very few visitors.

In 1949, the People’s Republic of China was founded, and the Chinese government renovated it in the 1950s. The government also opened public bus routes to connect it with the city center, drawing more visitors.

In November 1998, the Palace was listed on the World Heritage List.

Three quarters of the Palace is Kunming Lake, with pavilions, terraces, towers and corridors beside the Lake. Pavilion of the Fragrance of Buddha, Long Corridor, Marble Boat, Suzhou Street and Seventeen-arch Bridge are particularly worth visiting. 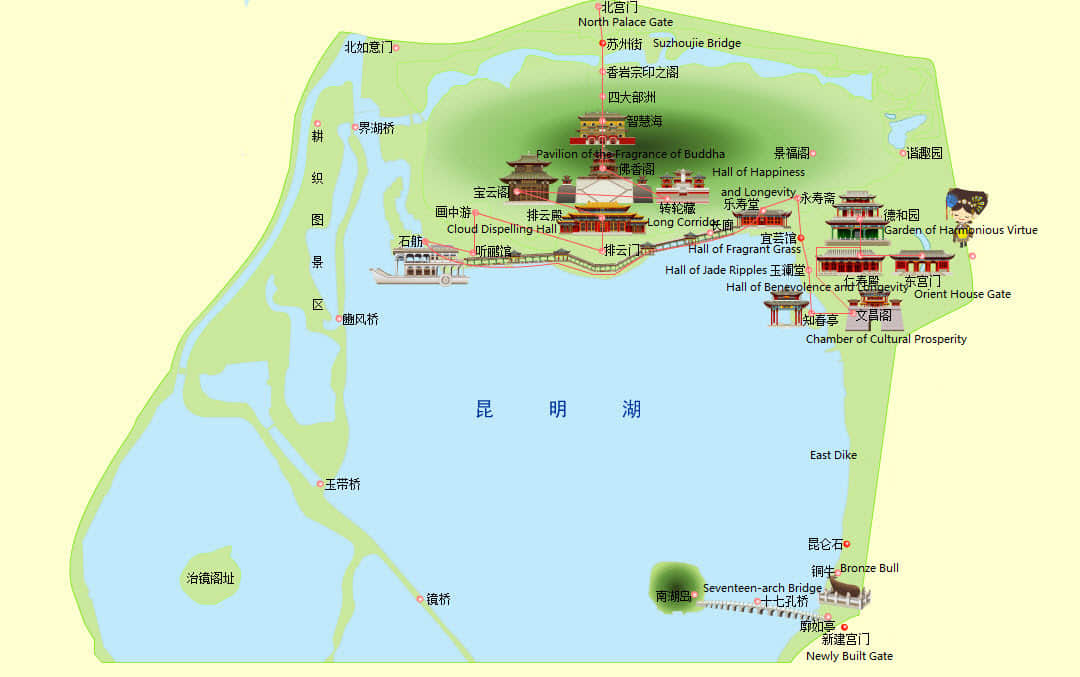 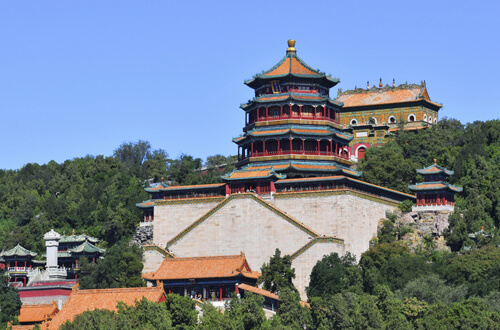 Pavilion of the Fragrance of Buddha

Pavilion of the Fragrance of Buddha

The Pavilion of the Fragrance of Buddha stands in front of Longevity Hill, and was built under the reign of Emperor Qianlong and renovated under the reign of Emperor Guangxu. The architecture of the hall is a religious style. “Fragrance of Buddha” conveys admiration of Buddha in Buddhism. Situated on a stone base 20 m high, the three-story Pavilion has eight sides and four eaves. Supported by eight pieces of strong lignumvitae, the tall Pavilion has a complicated structure with a powerful sense of momentum into the sky. This pavilion is the landmark of the Summer Palace. You can look over all the scenes of Summer Palace standing on the Pavilion. 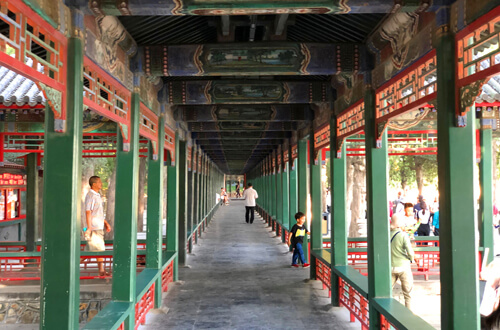 The Long Corridor starts with Moon-greeting Gate in the west of the Hall of Happiness and Longevity and ends with Shizhang Pavilion in the east of the Marble Boat, with a total length of 728 m. There are 273 sections, with four eight-square and double-eave pavilions, namely Liujia Pavilion, Jilan Pavilion, Qiushui Pavilion and Qingyao Pavilion. There are short corridors in the east and west stretching into the Lake, connecting Duiou Pavilion and Yuzao Pavilion. In the northwest of the Long Corridor is the 3-story Pavilion with scenery of mountains and lakes. The height of the base of Long Corridor changes in accordance with the terrain along the north bank of Kunming Lake, making Long Corridor stretch with twists and turns so as to avoid tedium. There are different color paintings in South China style on each tie beam, with the total number exceeding 14,000. The contents of these color paintings change slightly after renewals, with the original painting skills and styles kept unchanged. Themes include West Lake scenes, natural landscapes, human beings, flowers, and feathers from classical Chinese literary works such as A Dream in Red Mansions, Pilgrimage to the West, Water Margin, Romance of the Three Kingdoms, Ghost Stories and The Investiture of the Gods. In 1990, Long Corridor was included in Guinness Book of Records for remarkable construction skills and splendid color paintings.

The Bridge is the largest one in the Palace and located on the Kunming Lake between East Dike and Nanhu Island. It is 8 m wide and 150 m long, with seventeen arches. Over 500 stone lions of different sizes and shapes are engraved on the rails of both sided of the bridge.

Boat on the Kunming Lake 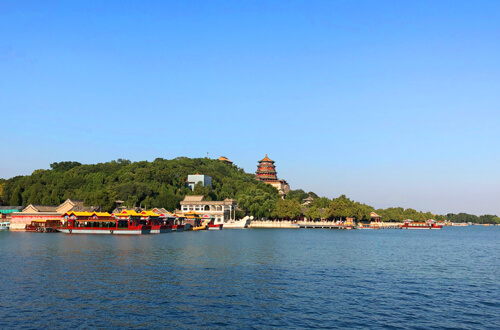 In addition to visiting the splendid halls, you can also take boats in the Palace on the Kunming Lake and enjoy the scenery. There are eight wharfs, namely Octagonal Pavilion, Chamber of Cultural Prosperity, Cloud Dispelling Hall, Shizhang Pavilion, Bronze Bull, Marble Boat and Nanhu Island. Boats of five kinds are available, namely pedal boats, sculling boats, boats powered by batteries, dragon boats and large gaily-painted pleasure-boats. Prices and routes of boating tours vary. Please choose based on your needs.

The Old Summer Palace is known in Chinese as Yuanmingyuan -- "The Garden of Perfect Brightness," In its heyday, its architectural splendor has since been compared to France's Palace of Versailles. In 1860, the Old Summer Palace was looted and burned down by Anglo-French troops. The Qing government tried to restore it but failed due to a lack of budget.

Yuanmingyuan has been left intentionally and visibly ruined to this day. Now it is a hollow echo of the past, left to remind all Chinese of what is known as the Century of Humiliation.

You may wonder what is the difference between these two Summer Palaces, and we have listed them below:

The Summer Palace was designed with a Chinese landscape garden in mind, while the Old Summer Palace included buildings in Western, traditional Chinese, Tibetan, and Mongolian styles.

If this is your first time in Beijing, the Summer Palace is highly recommended. If you have enough time and energy, and are interested in Chinese gardens, architecture, paintings and calligraphy, you can spend a whole day here.