A Symbol of Beijing at Night

Sanlitun is famous for its bar street. Sanlitun Bar Street is one of the “busiest” entertainment places for the night life in Beijing and is much visited by foreigners in Beijing as well as by celebrities and the rich.

Sanlitun Bar Street is one of the “busiest” entertainment places for the night life in Beijing. Nearly 200 bars (40% of all bars in Beijing) are clustered here and are frequently visited by foreigners in Beijing as well as by celebrities and the rich. Be aware that a lot of grifters are here so do not get tricked. 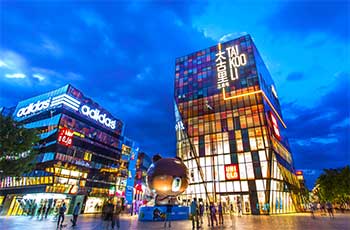 The construction area of Taikoo Li Sanlitun is 170,000 sqm, and a cultural and art block of 52,600 sqm is to be built on North Street of Sanlitun, directly facing Sanlitun Bar Street. All the buildings in the block are of four stories tall with a total height of 18 m. With the “3.3 Mansion” as the borderline, Taikoo Li Sanlitun is divided into a southern section and a northern section.

Commerce in the southern section is generalized, where bookstores, cinemas, galleries and bars cluster. Visitors can shop, drink, exercise, enjoy a fish meal, and watch movies here. You can also stroll on the Cultural Square over 1000 sqm.

The northern section is an upmarket area where shopping and hotels are expensive. Here is an exclusive area for world-class luxury brands, with a comfortable shopping environment for high-end consumers.

Sanlitun Ginkgo Avenue is in the embassy area on the East Fifth Street of Sanlitun. With embassies of various nations, this Avenue has a touch of exotic flavor. In November, tall and leafy ginkgoes on both sides of East Fifth Street present a grand sight with golden leaves dancing against the sky or scattered on the ground. An attractive scene is presented with exotic embassy buildings and armed police in their olive green uniform, appealing to many photography fans.