Represents half of the history of the Qing Dynasty 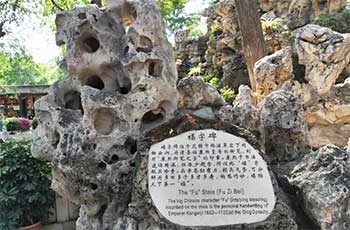 a monument engraved with "fu"

The fu culture at Prince Gong’s Mansion is a culture of hidden blessings. In Chinese architecture, bats symbolize blessings and good luck. The buildings in Prince Gong Mansion have cleverly borrowed this concept to use the designs of bats for all its buildings. The only visible Fu, as well as the most valuable treasure, is the Stele of Fu Character, written by Kangxi Emperor. It is stored inside the Miyun Cave as “the stele in the cave” means “a blessed paradise” in Chinese.

2. Unique Buildings in the Prince’s Mansion

The length of Prince Gong Mansion from south to north is 330m, and its width from east to west is 180m. In Beijing, there are dozens of prince’s mansions, which were either destroyed or are occupied for some other purpose. The only prince’s mansion conserved with its original appearance is Prince Gong’s Mansion 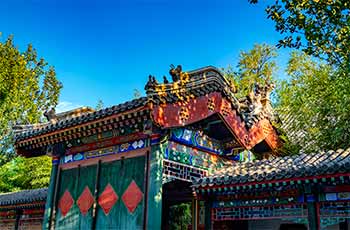 the buildings in the Prince's Mansion

The buildings in the mansion consist of three rows: the east, the middle, and the west. From south to north, the buildings are courtyard houses with multiple neat three-chamber structures. In these houses, there are not only buildings with imperial magnificence, but also ones with delicate ornaments from the civil society. Such a combination is the most recognizable characteristic of the prince’s mansion culture.

The garden combines southern landscape garden styles and northern building styles. It includes both western architectural wonders with the Chinese classical garden elements. Prince Gong’s Mansion is one of the typical Qing Dynasty prince’s mansions, and it also represents the traditional Chinese building at its best maturity.

3. Prince Gong’s Mansion and A Dream of Red Mansions

A Dream of Red Mansions by Cao Xueqin is one of the four greatest literary masterpieces in China. Prince Gong’s Mansion has something subtle to do with the Jia Mansion and the Grand View Garden. Over the years, there have been folk stories and heated academic discussions about the topic. In particular, Zhou Ruchang, a prominent scholar who specializes in the studies of A Dream of Red Mansions, argues that Grand View Garden was inspired by Prince Gong’s Mansion, which was occupied by the Caos before He Shen took over. His opinions are of great influence among scholars.