The Tombs of thirteen emperors in Ming Dynasty

The Ming Tombs are the mausoleums of the Ming Emperors. In total, there were thirteen emperors, twenty-three empresses, two crown princes, more than thirty consorts, and two eunuchs. All of the thirteen imperial tombs were built along the mountain, forming an architectural complex of mausoleums with a complete system. The Ming Tombs were built strictly in accordance with the traditional theory of feng shui in China. From site selection to planning and design, architects pay a lot of attention to the harmony between the buildings, natural landscapes, water and vegetation, and their works reflect the rich contents of the traditional Chinese culture. Here, you may visit the buildings of the imperial tombs, and you will have an understanding about the standards of funeral services for ancient emperors.

The Ming Tombs are a unity, and all the tombs included are relatively independent. Every tomb is built in front of a mountain, and their specifications are much the same. The distances between any two tombs may vary. The shortest distance is about half a kilometer, and the longest eight kilometers. Except for Tomb of Siling, which is located in the southwest corner, the other tombs all lie on the left and right of the Tomb of Changling in the shape of a circular sector. Among the Thirteen Tombs of the Ming Dynasty, only Changling, Dingling, Zhaoling and the Sacred Road are open to the public. 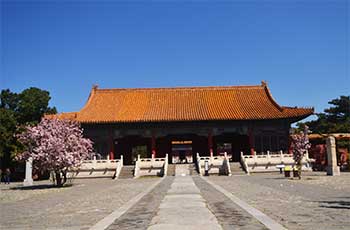 Located at the southern foot of Tianshou Mountain, Changling Tomb is the mausoleum of Zhu Di, Emperor Chengzu and the third monarch of Ming Dynasty (reign title: Yongle), and Empress Xu. Among the thirteen tombs, this tomb is the largest, and it was the earliest tomb built at the site, with the best preserved buildings on the ground. It is the oldest tomb among the thirteen tombs, as well as one of the major tourist attraction in the area.

Dingling Tomb is the mausoleum of Zhu Yijun (reign title: Wanli), Emperor Shenzong, who was the thirteenth emperor of Ming Dynasty. His two empresses were also buried here. The main buildings of the tomb include Ling’en Gate, Ling’en Hall, Baocheng City, Minglou Tower, and Underground Palace. The Tomb of Dingling is the only one that was excavated among the thirteen tombs. Its underground palace is also open to visitors.

Zhaoling Tomb is the multi-burial mausoleum for Zhu Zaihou (reign title: Longqing) and his three empresses. Zaihou was Emperor Muzong, who was the twelfth emperor of the Ming Dynasty. Currently, the intact buildings include Ling’en Gate, Ling’en Hall and its East and West Chambers, Fangcheng City, Minglou Tower, and Baoding Roof, etc. The Tomb of Zhaoling is the first mausoleum which is restored to its original appearance on a large scale among the thirteen tombs. 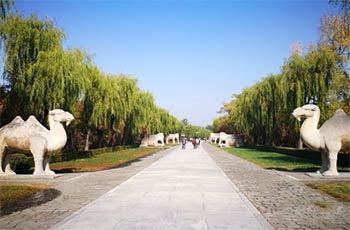 The Sacred Road is at the southern tip of the thirteen tombs. It is the passage leading to the tombs, with a total length of about 7 kilometers. It is also the first tourist attraction at the Ming Tombs. It consists of the Stone Archway, the Giant Red Gate, the Stele Pavilion, the Stone Statues, and the Gate of Dragon and Phoenix. The southernmost tip of the Divine Road is the Stone Archway. It is currently the earliest and largest stone archway in China.

The Stone Statues stand on both sides of the Divine Road, from the two hexagonal stone pillars to the north of the Stele Pavilion to the Gate of Dragon and Phoenix. There are 24 stone animals and 12 stone figures standing neatly, with vivid postures and delicate sculptural workmanship. They are exquisite rarities among the stone sculptural works in ancient tomb gardens, as well as the most exciting part of the Divine Road.