Lama Temple is the largest imperial Tibetan Buddhist temple of the Gelugpa sect (Shamanism) in Beijing City. Here is the former residence of Prince Yinzhen, the fourth son of Emperor Kangxi in the Qing Dynasty, and the birth place of Emperor Qianlong. Later, the site was changed into a Shamanist temple attracting a lot of pilgrims. Valuable ancient buildings and cultural relics inside the Temple are worth visiting.

the buildings in Lama temple

With a total area of 66,400 sqm, and a history of about 300 years, Lama Temple boasts over 1,000 shrine buildings, including Memorial Archways with overhanging eaves and brackets and Shushan Buildings in the east and west. Lama Temple is composed of the Heavenly Kings Palace, Lama Temple Hall (Main Hall), Yong-woo Hall, Falun Hall, and Wanfu Club, together with side halls in the east and west, and Exoteric Hall, Esoteric Hall, Mathematics Hall as well as Medicine Hall. The overall layout of the Temple narrows down gradually from south to north while the heights of the Halls increase conversely, presenting the grand visual effect of “tall Main Hall in deep yard” with the features of Han, Man and Zang nationalities.

2. Combination of Han and Tibetan Buddhism

Tributes paid by the Tibetan government in the Qing Dynasty to the emperors and the Temple are collected here (some can be found in exhibition halls of Panchen Building and Jietai Building). There are a lot of Buddha statues, Thangka and valuable cultural relics in the halls of the Temple. The Mount of 500 Arhats engraved from narra wood, the Giant Niche engraved from Jinsi Nanmu, and an 18m tall Buddha engraved from sandalwood are three masterpieces of woodcarving craft. The most popular Maitreya Buddha in the Wanfu Club is engraved from a whole piece of sandalwood, with 18m above the ground and 8m underground. 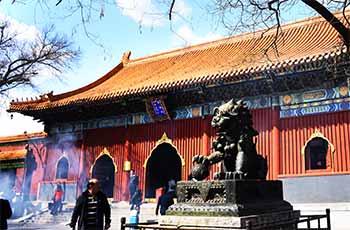 the Buddhism Events in Lama Temple

In addition to regular dharma assemblies on the 1st, 10th, 15th and 30th days of each month on the lunar calendar, there are major Buddhist activities held in Lama Temple. The number of visitors and followers would increase significantly at those times.