The buildings for the 2008 Beijing Olympics 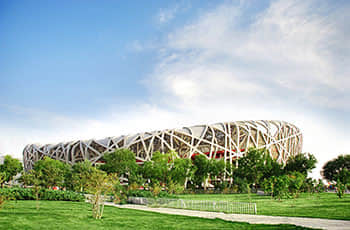 The Bird’s Nest is located in the south of the central area of Beijing Olympic Park. It was the main stadium for the Beijing Olympic Games in 2008. The total area of the project is 21 hectares, and there are about 91,000 seats for the audience. The opening ceremonies, the track and field events, and football matches of the Olympics and Paralympics were held at the Bird’s Nest. After the Olympics, the Bird’s Nest became a major professional venue for people in Beijing to participate in sports events and entertainment. And it has become a landmark sports building, as well as a legacy of the Olympics. 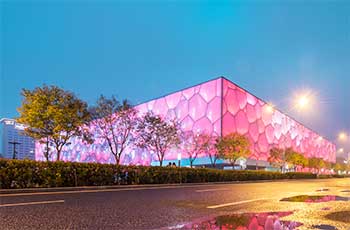 The National Aquatics Center (the Water Cube) is located in the Beijing Olympic Park. It is one of the landmarks for the Beijing Olympics in 2008. During the Olympics in 2008, the National Aquatics Center held the events of swimming, diving and synchronized swimming, etc. A total of 42 Olympic gold medals were granted in the center. Since the Olympics, the National Aquatics Center has provided venues to major aquatic sports events (such as Paralympics and FINA World Championships) and various regular events. It is also a multifunctional international fashion center with functions integrating swimming, sports, fitness and leisure, providing excellent infrastructure for the exercise of citizens.