All the charms of Old Beijing

At the northwest of the Forbidden City lies the ancient imperial garden, Beihai Park, encompassing “the Three Lakes”: Beihai Lake, Zhonghai Lake, and Nanhai Lake. Behai Lake is at the very center of the park. The total area of the park is 71 hectares, with 583 mu (96 acres) of water and 480 mu (79 acres) of land. Beihai Park was once the site of the imperial palaces used for short stays by members of the imperial household during the Liao, Jin and Yuan Dynasties. In the Ming and Qing dynasties, it served as an imperial garden for the emperors. It is one of the oldest and best preserved existing imperial gardens with the greatest diversity and uniqueness. In 1925, it was opened to the public as a park.

The North Shore Scenic Area is located at the northwest tip of the park. It consists of a few religious buildings, including Kuaixuetang Hall, Five-dragon Pavilions, Little Western Heaven, Jingxinzhai, Chanfu Temple and Western Heaven Buddhist Realm. The Nine-dragon Screen, a popular attraction known to all, can also be found here. The Screen is built completely with colored glaze bricks, with a length of 26m and a height of 6.65m. It has a roof with five edges and four slopes in its structure. There are nine curled-up dragons on both sides of the screen. With the dragons decorating the top and the two ends, there are thirty-two dragons in total. The Curled-up Dragons Playing with the Pearl amid waves and clouds are of vivid styles, bright colors, and amazing craftsmanship, making it a wonderful piece of art among the colored glaze buildings. 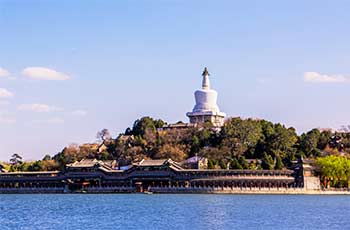 The East Shore Scenic Area is located at the northeastern tip of the park. It mainly consists of Xiancantan (Altar to the Goddess of Silkworms), Huafangzhai (Studio of Colorfully-painted Pleasure Boat) and Haopujian. Qionghua Islet is located in the south of the Beihai Lake. On the center of the islet stands Yong’an Temple, which is surrounded by a number of buildings, including the Long Corridor, Yilan Hall, Yuexin Palace, and Yuegu Tower.

The White Pagoda, now a landmark of Beihai Park, is at the highest point on the center of Qionghua Islet, with an aura of dominance over the entire park. Circular City is at the southernmost tip of Beihai Park. Its main building is Chengguang Hall, in which a jade statue of the Buddha with a height of 1.5m is enshrined. Gems are embedded all over the Buddha statue, which shines with dazzling brightness. It is a must-see attraction for tourists.

2. Experience the Lifestyle of the Locals

Every morning, some senior citizens like to work out and take a walk with their pet birds in Beihai Park. The afternoon and evening are the best times to go boating in the park. When you visit Beihai Park, you will appreciate the exquisite buildings from the past imperial dynasties. You could also sit on the lakeshore and have a chat with the senior citizens, who can tell old stories about the unofficial histories of the imperial house in Beijing. You could also join the folks who are kicking shuttlecocks or playing diabolo. You could learn some tricks from them. This is a perfect way to experience the lifestyle of old Beijing. 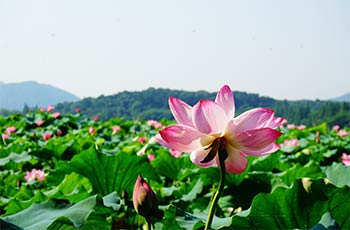 2) Each year, from November to December, Beihai Park holds Beijing Chrysanthemum Show, at which several hundred kinds of chrysanthemum plants will be on display. It is an amazing fair of flowers.

Route 1. A tour to the Circular City and Qionghua Islet (2 hours)

You may visit the Circular City to see the Jade Buddha, Jade Jar, White-robe General, Shade Marquis, Chengguang Hall, Jingjitang, the East and West Side Chambers, and then you can reach Beihai Lake when you exit from the North Gate.

You could go through the Duiyun and Jicui commemorative archways to enter Yong’an Temple via Yong’an Bridge. You could visit Falun Hall, Longguangzizhao Pailou, Lankavatara Grotto, Kunlun Rock, Yueyun Rock, Pagoda Moutain Main Stele, Pagoda Mountain Steles, Dengquyi, Yiyuan Pavilion, Yuexin Hall, Zhengjue Hall, Pu’an Hall, Shengguo Hall and Zongjing Hall. Climbing up the steps, you could enter Shanyin Hall, where you are able to enjoy the view of Zhonghai Lake and the White Pagoda. You could walk eastwards to go downhill via Lancuixuan Loft, and you could have tea at Borexiangtai Pailou and Zhizhu Hall. In the south stands Huiri Pavilion, and in the north Jianchun Pavilion and Lord Lv Cave. Below the cave stands the Stele of Qionghua Islet in Spring Shade. When you walk through the Long Corridor, Hall of Gentle Ripples (Yilantang), Studio of Peaceful Path (Daoningzhai) and Pavilion of Sharing Coolness (Fenliangge), you can reach Chamber of Reading the Classics (Yuegulou), where you can appreciate the stone inscriptions of Sanxitang (Hall of Three Rarities). Behind the chamber to the north stand Mujian Chamber, Yanyun Jintai Pavilion, Tongxian Chenglupan, Yihutiandi, Qianyan Chamber, Yannanxun Hall (Hall of Holy Basil), and Panlanjingshe Hall (Hall of Rising Mist), etc. When you go downhill southward to Yong’an Bridge, you can exit from the South Gate.

Route 2. A Whole Tour around the Park (4 hours)

If you want to tour the entire park, after your visit to Circular City and Qionghua Islet, you could take a ferry boat at Yilantang (Hall of Gentle Ripples) to the north shore, where you could visit Five-dragon Pavilion, Jileshijie (Little Western Heaven), and Chanfu Temple. You could then take a path through Chengguantang (Hall for Gazing at the Water) and Yulanxuan to visit Kuaixuetang Hall, in which you can appreciate the 48 calligraphy steles. Then you could visit the Nine-dragon Screen. To the south of the screen is the Imperial Restaurant, and you could have a meal at the restaurant. You could go eastward to visit Xitianfanjing Hall (Hall of Western Paradise), where you can appreciate the hall built with Phoebe zhennan wood and have a tour of Jingxinzhai (Studio of Tranquil Heart). You could tour along the lake to the east shore, on which you can first visit Haopujian and then Zhishan Bridge, via which you can reach the South Gate if you keep going southwards. 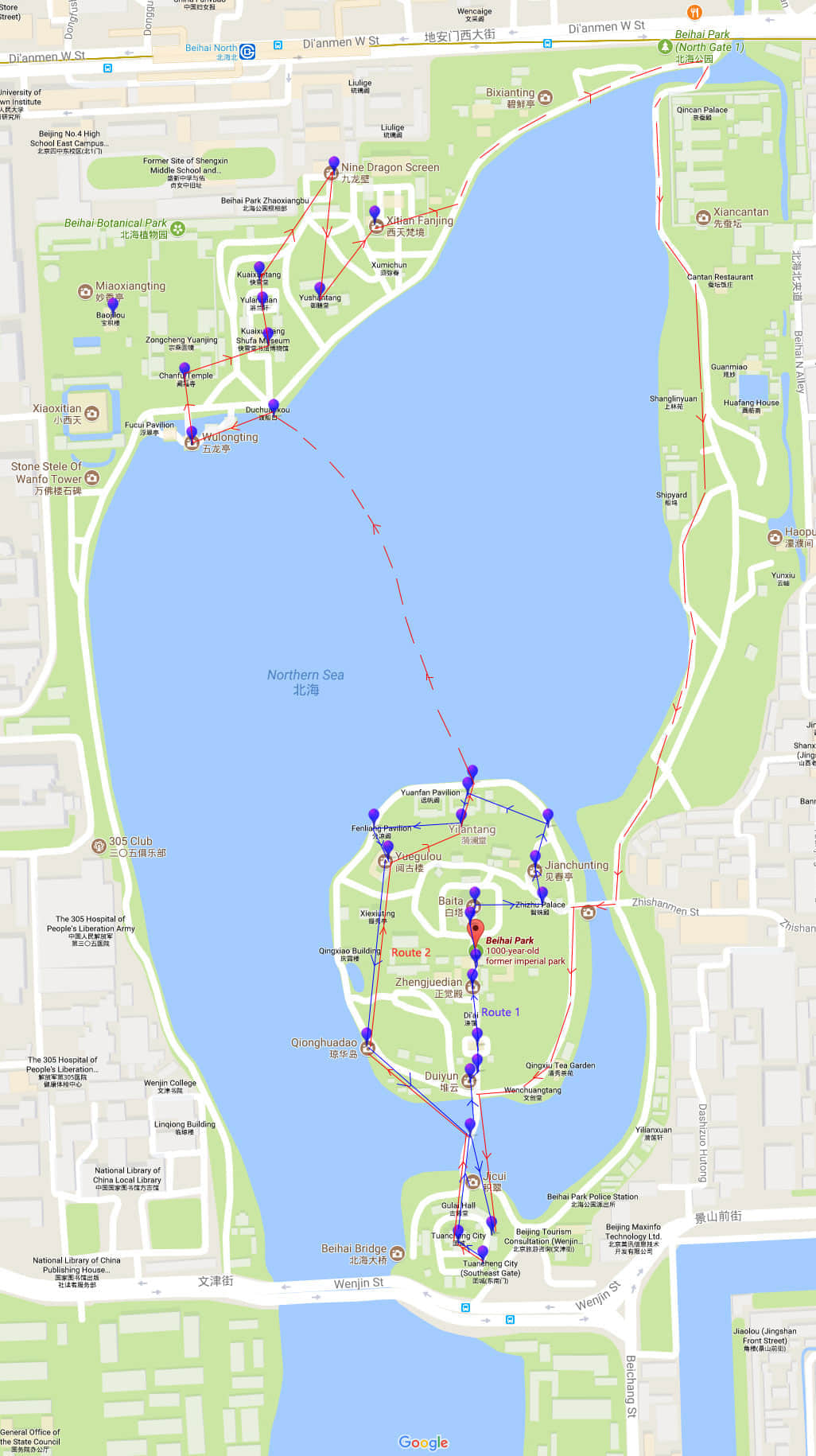