Located in the west of the Dayan Pagoda in Xi’an, construction started on Shaanxi History Museum in 1983 and was completed on June 20, 1991. It is the largest modern national museum in China. The museum covers an total area of 65000 sqm, with a cultural relic warehouse of 8000 sqm and an exhibition area of 11000 sqm. The museum houses over 37000 items of cultural relics, including simple stone tools used by ancient humans and items used in daily life before 1840, with a time range spanning over 1 million years. There are different types of cultural relics in large quantities, with exquisite bronze ware of the Shang and Zhou Dynasties, terra cotta figures in a variety of shapes, gold and silver items from the Han and Tang Dynasties ranking as the best nationwide, and distinctive murals from the tombs of the Tang Dynasty. The Museum is truly a treasure trove boasting a wide variety of fine artwork. 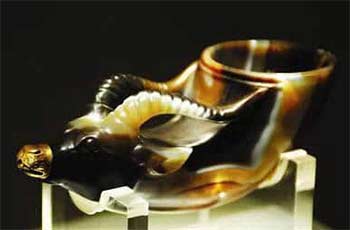 Agate cup with animal head in gold of the Tang Dynasty

1. Agate cup with animal head in gold of the Tang Dynasty

As the best crafted jade ware from the Tang Dynasty, it is said to be worth the value of half of Hong Kong and taken as the highlight of Shaanxi History Museum.

2.Gilded silver pot with dancing horse of the Tang Dynasty

This item is prohibited from being displayed outside China. You can only see it here.

The vessel is 77 cm high with the caliber being 56.5 cm and was cast under the reign of Emperor Chengwang in early West Zhou Dynasty. 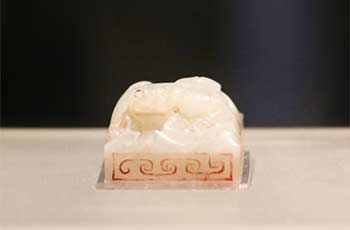 Jade Seal of the Queen of the West Han Dynasty

4. Gilded Silver and Bronze Bamboo-shaped Censer of the Han Dynasty

This item was used by Princess Xinyang, the elder sister of Emperor Hanwu. It is 58 cm high and weighs 2.57 kg and is held as the Grade-one Cultural Relic.

5. Jade Seal of the Queen of the West Han Dynasty

The seal is made of jade produced in Hetian region of Xinjiang and the only material evidence of the Seal of the Queen in the Han Dynasty.