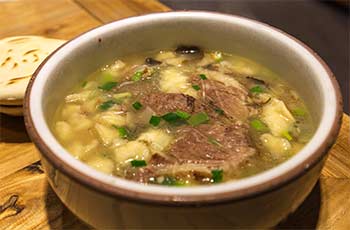 This is the most famous of Xi’an foods. It is delicately cooked thick soup with mutton, offering rich nutrition with delicious flavor. The dish can be enjoyed all year round, but with the benefit of warming the stomach, it is better to enjoy the dish in winter as it could cause overheating if taken in summer. You had better drink tea to quench the fire inside. It has long been popular among local residents and visitors.

You should break the bread into pieces in the size of soybeans, put them into the bowl, and then have the chef pour soup and mutton into the bowl.

The traditional dish uses the goat meat with its distinctive flavor. However, goat meat is dry and would smell ‘gamey’ if dealt with improperly. If you do not like the goat meat, then beef is recommended as an alternative.

As one of local foods in Shaanxi, Liang pi originated in the Qin Dynasty with a variety of types. Liang Pi tastes fresh and tender with rich nutrition. It helps keep warm when enjoyed in winter and cool in summer. The dish suits all seasons as green food with causes no harm to the environment.

Liang Pi with Sesame Paste is most popular in the Muslim Quarter. A lot of sesame paste is used as the main seasoning, offering delicious flavor. 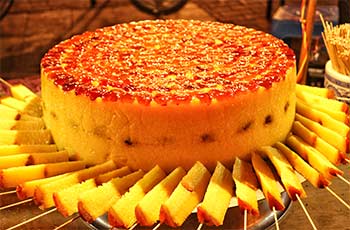 Rice and jujube cake originated in the Zhou Dynasty. The pot in which the cake is made is called Zeng. Soft and tender, the cake is made of glutinous rice, and includes kidney beans and red jujube fruits.

The glutinous rice of the lowest layer is stained with jujube red; the middle layer is brown kidney beans; and the top layer is the jujube paste of dark red. Then green raisins decorate the jujube paste, which is really appealing. The cake tastes soft and sweet, and is very popular among local residents.

Deep-fried persimmon pastry is made of persimmons produced in Lintong, along with flour, roses, walnuts, white sugar, crystal sugar, and suet. Then the pastries are baked in the pan. With a golden color, the pastry tastes soft and sweet. 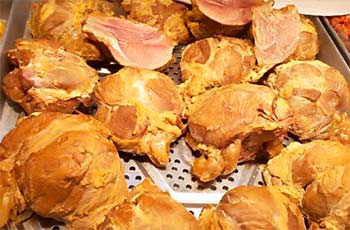 With over a hundred years’ history, Laotongjia cured mutton has won the best fame. The white part and red part of their cured mutton are distinct with no gamey smell and a crispy texture. It is said that Empress Dowager Cixi spoke highly of the cured mutton of Laotongjia.

In addition to rich protein and fat, mutton serves as an appetizer, and helps tone the kidney. Visitors can buy the mutton as gifts for friends.

Spicy soup with meat balls is a local Muslim dish in the Muslim Quarter of Xi’an, and is popular among local residents as breakfast. There are meat balls made of beef, potatoes, carrots, agaric mushrooms, and wax gourds in the soup.

The soup is made with beef bones and mutton bones. Then the meat balls and vegetables are dropped into the soup. Finally the soup is thickened with a starchy sauce.
Your tongue feels numb and you begin to sweat, with the lingering taste. 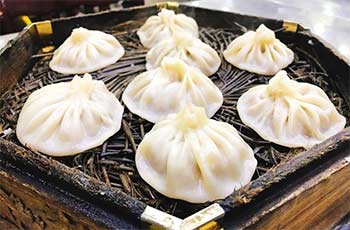 The soup dumplings taste fresh and tender, with thin wrappers, a delicate shape and thick soup. The Jiasan Soup Dumplings dish in the Muslim Quarter is best known for the following features: thin wrappers, fresh fillings and tasty soup.

There are also suggestions on having the soup dumplings. First, cook the dumplings when you want to have them; second, catch them at the seam side with chopsticks, pull them up softly and have the dumplings leave the wooden utensil gradually. Hold the dumpling with a spoon, bite a small part of the dumpling, blow softly to cool it a little and drink the soup inside. Then eat the dumpling with seasoning. Otherwise, you may get burnt by the soup. You can only taste the flavor of fillings, soup, and wrappers.

Roujiamo is also known as a Chinese hamburger, an authentic snack in northwest China. With crispy and tasty cured meat inside the bun, it is really delicious and loved by people at home and abroad.