The steepest mountain in the ancient Chinese eye

Mt. Hua is situated in Huayin City (county-level) under Weinan City, Shaanxi Province. It is 120 kilometers away from Xi'an. It is the steepest mountain in the ancient Chinese eye. Its religious significance made it a critical part of the cradle of Chinese civilization, Shaanxi Province. Mount Huashan also boasts abundant resources, unique landscapes and rich cultural connotations. There are more than 210 famous scenic spots, long sky planks erected in the air, upright paths for which visitors are forced to do the ‘falcon turn’ and other paths made out of steep cliffs such as Qianchizhuang and Baichixia.

West Peak is a steep summit developed from a graben. It is the most beautiful and precipitous mountain in Huashan. As the giant stone in front of Cuiyun Hall looks like a lotus, the peak is also called Lianhua or Furong (lotus) Peak. West Peak is a completely natural boulder. The cliff in the northwest looks just like it has been split by a giant saw. The momentum of the cliff is quite representative for the geographic characteristics of Mt. Hua. Standing on the top of Xifeng, one will see the surrounding mountains are all covered in the rosy to black colored clouds. 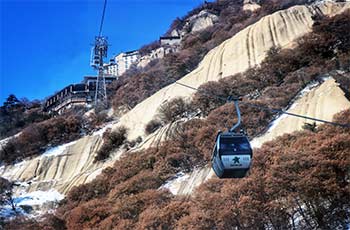 One of the main peaks of Huashan is named after its position. The northern peak has cliffs for three of its faces. It is also known as Yuntai (cloud terrace) Peak. The North Peak is the pass to all of the other four peaks. Although it is not as high as the other peaks, it has the only path to the southern part.

A Taoist temple, Zhenwu Hall, can be found on the top of Beifeng. It leans on the mountain and presents a unique shape. It is already part of the pleasant scenery. There is a platform at the top of the North Peak, which is a good place for the panoramic views of the East, West and South peaks as well as the ridge access, Canglong Ling (dark dragon ridge). The trees along the peak are lush and full of grace, which is an ideal resting place for mountain hiking.

At an altitude of 2090 meters, the peak got its name from its position, like its peak peers. There is a platform on Yanggong Tower Peak of Dongfeng. The steep place offers an eye-popping view, especially the sunrise. So Dongfeng is also named as Chaoyangfeng (summit facing the rising sun). 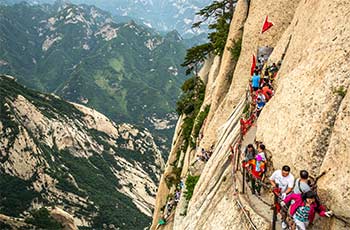 The most breathtaking sight of Mt. Hua is the Changkong Skywalk around the cliff of South Peak. Visitors stand on a plank at an altitude of 2,160 meters. The path is paved with wooden boards and is anchored to the wall with nails. The only protection is the chains around the planks. The entire plank road is divided into upper, middle and lower sections. For the 50 meter-long trip, everyone has to stand hugging the cliff and move extremely slowly, wearing a harness. At the end of the cliff path, people will see a temple named Hezuci Temple. It is said that the Taoist priest He Zhizhen made the path to practice in nature during the Yuan Dynasty (A.D. 1276).

Tips:
1. The skywalk is a dead end. You have to risk your life again to return after visiting the Hezuci Temple.
2. This adventure is not required for those who would like to go to the top. Be aware that the path is actually not suitable for every tourist.
3. Safety harness is a must for the path.

Canglongling (Dark Dragon Ridge) is one of the famous paths in Mt. Hua. Located beneath Mass Salvation Platform and Wuyunfeng (Five Cloud Summit), the ridge looks like a dark flying dragon. The ridge is over 100 meters long but its width is less than 1 meter. It is definitely a test for any visitor. Therefore, there was a story about the great littérateur and politician Han Yu, who had the courage to confront the Emperor, but got frustrated by the steep ridge and sent a letter for help here. But someone would rather believe that Han (courtesy name, Tuizhi) was really anguished over the perilous situation of the state and he happened to let out his emotion here.

Qianchizhuang is a large crack on a cliff. More than 370 steps between the boulders on both sides are the only path. Only one third of each foot can be supported by each step. When people are climbing it one by one, they have to cling tightly to the chains. Looking upward, the sky is revealed through a narrow line and looking downward, all the scenes below are framed through a narrow wellhead. "Tai Hua Throat" (the throat of Tai Hua Mountain, another name of Mt. Hua) is engraved into the cliff here, marking its critical place as a throat.

Baichixia resembles all the features of Qianchizhuang, except that it is only 46 meters and it has only 91 stone steps. The steep walls and narrow passages make it another natural barrier of Mt. Hua. 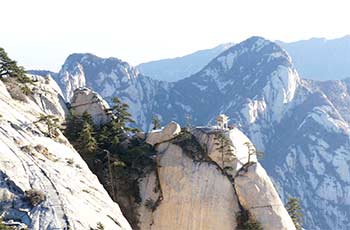 Falcon Turn is also a dead end. People will experience the same feeling just like that felt in Changkong Skywalk. The upper section of Falcon Turn pops out more than its lower section. It is a little bit like what Tom Cruise does in ‘Mission Impossible 2’, climbing the canyon. The dangling chains are the only things to mark the invisible path. Sometimes, people have to flip their bodies like the falcon turning in the sky. It looks like it’s not as horrible as Changkong Skywalk, but the difficulty level is fearsome. When it is time to climb back (as in fact you must), your hands, eyes, knees and feet must be well coordinated. For a small section, the chain is only available on one side. The hike requires strength and balance.

The festival falls on the 15th day of the third month each lunar year. On that day, a grand temple fair and celebrations have been held since ancient times. The activities of the temple fair are very rich and include modern international mountaineering festivals and a photographic competition as well as ancient chess competitions, brush painting and calligraphy, Shaanxi Qin Opera, Huayin Martial Drum Performance, etc. which are all fascinating events. Cultural performance groups from other regions also put on performances such as juggling, magic and opera shows. 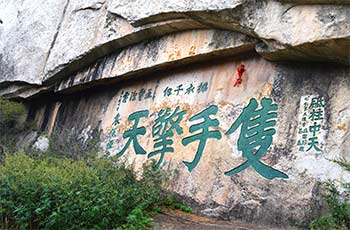 Mt. Hua is known as the “Corridor of Calligraphy Art in the Air”. In the cliffs and rocks along the hiking way, there are a plethora of stone carvings with rich contents. Works in different styles are of high artistic value. The literati and the priests and monks have left an extraordinary legacy to us. It is part of the landscape of Mt. Hua. If the art of calligraphy is examined carefully, various styles, such as cursive handwriting, regular script, clerical script and seal characters can all be seen. The powerful contents, beautiful expressions and the talent behind the words add to the magnificence of nature. One would find it a very unforgettable journey for a natural and humanistic essence.