A first choice for calligraphy fans

Xi’an Forest of Stone Steles Museum is rated as the “Treasury House of the Culture in the East”, “Palace of Stone Inscriptions in the Han and Tang Dynasties” and “Library of Stone Inscriptions with the Longest History”. As one of the most valuable cultural relics in Xi’an, the Museum was listed as a National Key Cultural Relics Protection Unit by the State Council in 1961.

In the Museum, you can find steles (or stone monuments) and epigraphs of dynasties spanning 2000 years. Major works include Yan Qin Li Stele and Stele of Yan Family by Yan Zhenqing; Xuanmi Stele by Liu Gongquan; Da Tang San Zang Sheng Jiao Stele by Wang Xizhi; and the Thousand-character Writing by Huaisu. 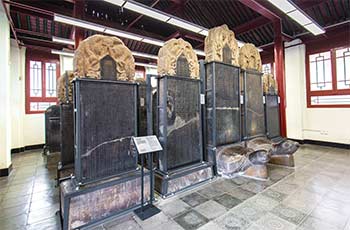 the epigraphs in the Museum

The Kaicheng Stone Classics were finished in the 2nd year under the reign of Emperor Wenzong (AD 837), and includes twelve Confucian classics such as The Book of Poetry, The Book of Calligraphy, The Book of Rites, The Book of Change and The Spring and Autumn Annals.

You can buy inscription rubbings.

You can buy inscription rubbings from the steles when visiting the Museum, which are priced between several hundred yuan and a thousand yuan. Alternatively, you can buy the rubbings on the street beside the Museum at lower prices.