The most complete ancient city wall

Xi’an City Wall is a landmark of ancient Xi’an. The existing city wall was built in the early Ming Dynasty and is the most complete one in China. With a total length of 13.7 km, it takes 80 minutes to ride a bicycle around the wall. The design of the city wall was based on the imperial city in the Tang Dynasty, which includes such defense works as moats and watchtowers in ancient Chinese cities.

1. Biking on the city wall 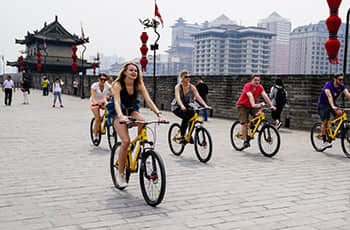 Biking on the city wall

Riding a bicycle on the city wall is a popular activity. You can rent a bike at west gate, east gate, south gate and north gate and return the bike at any gate mentioned above after riding (please confirm when renting the bike). There are also sightseeing buses at the four gates and you can take the bus to visit the city wall for about 50 minutes.

2. Performance activities at the south gate

Xi’an City Wall is a favorite photography site. The popular “City Wall Stories” was shot here by photographer Wang Jianming to record the history of the city wall and an expression of love for the Xi’an City Wall.