Located at No.3 Yuanlin Road in northeastern Suzhou City, the Lion Grove Garden is roughly rectangular in shape, with the east and west ends slightly larger. It covers an area of 1.1 hectares, of which 0.88 hectares are open to visitors. The garden has strange “lion-like rocks under the flourishing bamboo groves”, and was built in memory of the Tianru Zen Master Weize’s teacher, Abbot Zhongfeng, who lived in the Lion Peak of Mount Tianmu in Hangzhou, Zhejiang. In Buddhist scriptures, the Buddha sits on a lion seat, thus the garden is named the “Lion Grove Garden” to honor the Buddhist heritage. The garden has been abandoned and restored many times over. The temple, the garden, and the residential block have been separated and then integrated again. It’s a combination of traditional gardening techniques and Buddhist thinking. In modern times, the Pei family has introduced both western-style garden design and a traditional Chinese ancestral temple into this place, turning it into a temple-garden blending Zen philosophies and the pleasures of gardens.

The Hall of Feast and Joy

The hall is named after a poem in the Book of Songs: “Let’s feast and rejoice. Our friendship and entertainment will never end.” This hall is the main hall of the garden, where the owner used to entertain his guests. It’s also a famous twin-hall in Suzhou gardens. On the beam of the hall stand three gods and one fairy. Like three lucky stars, they shine upon the owner and the guests, bringing them good fortune.

The Hall of Flower Baskets

The Hall of Flower Baskets is built facing the pond, with a terrace in the front. On the south side of the hall, there are 14 tall floor-to-ceiling windows, with a Tang-dynasty poem inscribed on each of them. On the north side, landscape and character paintings are inscribed on the 6 long windows. Inside the hall, the ends of the pillars are carved like flower baskets and plum blossoms, orchids, bamboo, and chrysanthemums. In the middle of the hall stand 4 screen doors, with the Pine Longevity Painting engraved on the southern half, and the Essay of Joyful Ambition (composed by the Han-dynasty philosopher Zhong Changtong and written by Wang Tongyu) engraved on the northern half.

The Stone Boat House, also called the Land Boat or the “Untethered Boat”, was built at the northwestern end of the water pool in the early Republic of China, by the garden’s last owner in the 20th century. The middle and rear cabins of the boat are double-deck, with 86 Harmony Windows inlaid with colorful glass on the outside walls. All around the boat is water. At the ship’s bow a small stone bridge shaped like a springboard connects the boat with the pool bank. The boat, the pillars, and the roof are all made of stone; the doors, the windows, the hanging fascia, and the decorations are wooden structures. The house roof is shaped like a curve, with the fore cabin higher and the middle part flat. On the roof there is a roof terrace. The cabins have two stories, connected by a staircase. The Boat House is both delicate and lifelike. Some of the decorating patterns on this boat already show western influence. 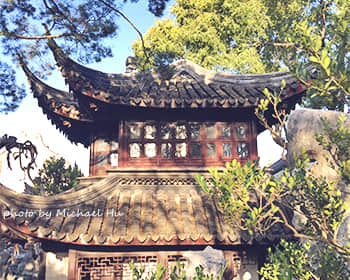 The Sleeping Clouds Chamber is a resting place and a room of meditation for the monks. Shaped like an inverted “T”, and with the 6 up-flying eaves, the unique design of this chamber has made it stand out among Suzhou gardens. The space between the walls of the chamber and the surrounding stone walls are so narrow that the chamber looks like it’s built in a coil. The name “Sleeping Clouds” comes from the Song-dynasty poet Yuan Haowen’s lines “When did I start to sleep on the clouds? The moment I grew tired of court politics”.

The Pavilion of Greeting Plum Blossoms

The name of the pavilion comes from the Zen Story Book. The pavilion is the main building of the western part of the garden. It’s built on a small hill, with a lush forest of plum trees in the front and a spread of red and green plum trees growing delightfully beside. The floor under the plum trees is also decorated with fancy plum blossom patterns. In this exquisite and towering pavilion, hangs an inscribed board with the words “Spring’s Message before the Flowered Window”. These words were taken from Tang-dynasty poet Wang Wei’s poem Miscellaneous Poems: “Oh tell me, the day you came, has any winter-plum, blossomed before the window-frame?” The furniture in the pavilion is all shaped like plum-blossoms, and plum-blossom patterns can be found engraved on the bottom of the table, on window frames, and on the floor. The paintings and calligraphy works on the 8 folding screens are all plum-themed, reflecting the aesthetics of the ancient Chinese literati. 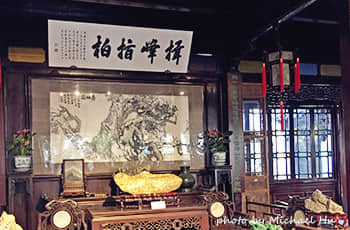 The Cypress Pointing Pavilion is a two-story building. Its full name is the “Peak Bowing and Cypress Pointing Pavilion”. As the Lion Grove Garden is the only existing Zen garden, the names of the buildings mostly came from famous Zen stories, and this pavilion is no exception. Its name came from the story of “Master Zhao Zhou Pointing at the Cypress”. Ming-dynasty poet Gao Qi wrote a famous line about this story, “People came to ask but he said nothing. Smiling, he pointed at the cypress in the front yard”. The “Peak Bowing” part came from Song-dynasty poet Zhu Xi’s lines “bowing before the Lushan Mountain, which stands mighty and towering on flat ground”. The Cypress Pointing Pavilion is tall and lofty, with corridors enclosed by handrails on the four sides. Before the pavilion are several ancient cypress trees, forming one of the main scenes of the Lion Grove Garden. 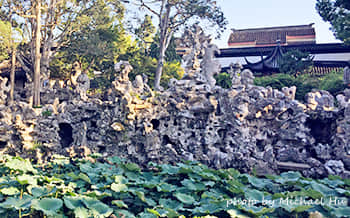 South of the Pavilion of Slender Bamboos stands a yellow stone rockery. Because the color of the stone is yellowish brown, it is named the “Little Red Cliff”. Beside the Little Red Cliff are mountain creeks and a deep pool. In the lower part of the rockery there is a U-shaped culvert. The Cliff stretches from south to north for 8.6 meters along the veranda and the low walls, and is 5 meters in width, covering an area of 43 square meters.

The South Water Rockery starts from the western end of the “Little Red Cliff”, or the low wall on the west of the Imperial Stele Pavilion. It stretches from east to west along the southern veranda for 32 meters, and is 5.3 meters in width, covering an area of 169.6 square meters. According to legends, the peaks in the South Water Rockery resembled the 12 Chinese Zodiac animals. Today we can still distinguish the rabbit, the pig, and the horse among the rocks.