A Classical Garden of Suzhou

Built in the 21st year of the Wanli Period in the Ming Dynasty (1593), Lingering Garden, China’s outstanding classical garden, is famous for its ingenious layout of architecture and various peculiar rocks of different shapes. Lingering Garden, together with the Humble Administrator’s Garden in Suzhou, the Summer Palace in Beijing, and Chengde Mountain Resort are designated China’s Top Four Classical Gardens. Suzhou classical gardens, including Lingering Garden, were included on the list of World Heritage Sites in 1997. 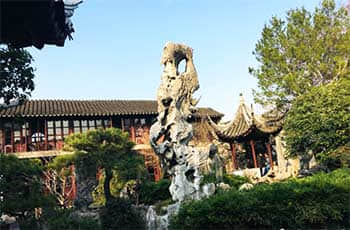 You can enjoy the beauty of clear waters, an idyllic landscape, wooded hills and a courtyard garden in Lingering Garden. The whole of Lingering Garden can be divided into four parts, the central part, the eastern part, the western part and the northern part. The walls on both sides of the curving corridor through the scenic area are carved with the “Lingering Garden Tablet Inscription”.

The waterscape in the central part is the quintessence of the whole garden. The eastern part is outstanding with its winding courtyard and veranda. As one of Three Wonders of Lingering Garden, the Cloud Capped Peak behind the pool in the courtyard is a combination of the four peculiar features of Taihu Lake stones, namely “lean, wrinkled, porous and perforated”. The other two wonders are Nanmu Hall and Fish Fossil. The northern part features idyllic scenes with bonsais, flowers and trees. The western part is the most heavenly spot in Lingering Garden with natural charm, surprising rockeries as well as areas of earth interspersed with stones. 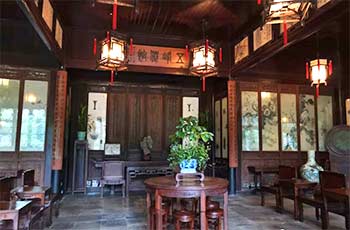 With its lean and long shape, the Cloud Capped Peak is without equal and displays the four peculiar features of Taihu lake rock, that is “lean, wrinkled, porous and perforated”. It is said that this rock was a relic found in Huashigang, a means of transport in the late Northern Song Dynasty (960-1127).

Located at the Celestial Hall of Five Peaks, Nanmu Hall exhibits columns made up of Nanmu wood, which unfortunately were destroyed during the Anti-Japanese War. Later, cement was used to plaster the Nanmu columns and then they were repainted.

Produced by Diancangshan in Yunnan, the Fish Fossil is a kind of marble with a diameter of about 1 meter and a texture which is like a landscape painting.

Lingering Garden is not too big and you can access most of the garden along the over 700-meter-long curving corridor and paths with guiding signs in the garden. There is a two-story tea house near to the Cloud Capped Peak, where on the ground floor you can spend a mere RMB 5 for a cup of tea, and, while it costs several dozen per cup, with a comfortable seat in the more leisurely upstairs.