Wong Tai Sin Temple is also named Sik Sik Yuen, and is a well-known shrine and tourist attraction in Hong Kong. It is dedicated to Wong Tai Sin, or the Great Immortal Wong. Religious syncretism is featured here with the enshrined and worshipped Confucianism and Buddhism figures such as Confucius and Avalokitesvara.

The grand palaces in Wong Tai Sin Temple display the features of ancient Chinese temples. The 18,000 m2 Taoist temple has the main shrine hall, Sansheng Hall and Congxin Yuan, etc. The memorial archway is probably the most characteristic building. Lv Dongbin, Avalokitesvara and Deific General Guanyu are enshrined along with the image of Confucius, the exemplary teacher for all time in China. Numerous ancient codes and records of Taoism, Buddhism and Confucianism are stored in the Temple. 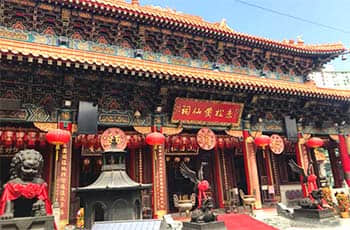 Main Hall (for Buddha Temple, it is Buddha’s Hall)

The main hall is grand and glorious with delicate engravings. In the midst of the smoke, devoted believers kneel down to pray for blessings. There stands a stone epitaph in the hall informing visitors about the story of how Huang Chuping became immortal.

The Nine-Dragon Wall in Wong Tai Sin Temple is a replica of that in the Forbidden City in Beijing. The inscription on the wall was the work of the president of the Buddhist Association of China, which adds to the traditional air of the Temple.