One of the Three Best Night-View in the Word

Victoria Harbour, is also shortened and referred to as V-Harbour. Its east side reaches Lei Yue Mun and its west side faces the sea, connecting the Tsing Yi Island and the Hong Kong Island. The middle part, which is between the Tsim Sha Tsui and the central district, is narrower. Because of its broad water-surface and deep water-depth, it is a natural great harbor. Therefore, Hong Kong also has the reputation of "The Pearl of the Orient" and "One of the Three Best Night-Views in the World". The name of Victoria Harbour comes from Queen Victoria of the United Kingdom. 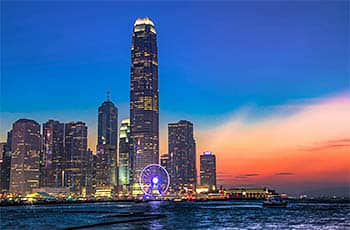 The nightview of Victoria Harbour

Victoria Harbour has a broad water surface and beautiful scenery. Every day, during sunrise and sunset, the bustling ferry shuttles between the north and south shores. The fishing boats / tourist boats / 10,000-tons cargo ships, together with the sound of their whistles, create a wonderful view of the sea. During the day, in Victoria Harbour, there are blue skies, white clouds and clear waters, while many small boats and tons of giant ships enter and leave the harbor without disturbing each other. At night, it will be even more flamboyant, creating a magnificent night view of the "Pearl of the Orient".

A Symphony of Lights

“A Symphony of Lights” is a large-scale lighting show at Victoria Harbour at 8:00pm every night. Accompanied by rhythmic music, more than 40 buildings are lit up with colorful and dazzling lights. Under the lights, you will feel like you are a superstar.